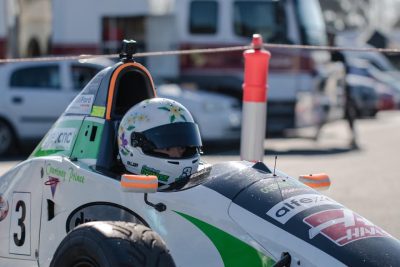 Sonic’s quartet of teenage ragers are ready to rock in this weekend’s first round of the 2018 Australian Formula Ford Series at Winton Motor Raceway.

Hunter McElrea, Courtney Prince, Angelo Mouzouris and Hamish Ribarits are geared up for what they collectively hope will be a successful debut at the track they all regard as ‘home’.

“Winton is the track we test at,” says 18-year old McElrea, “we test there at Sonic and it’s the circuit we all have the most amount of experience at. We all know the place pretty well.”

McElrea, who was born in the USA but spent his formative years growing up in New Zealand before moving to the Gold Coast is now based in Melbourne where he works at the Sonic Motor Racing Services home base in Bayswater.

He’s amped about taking the wraps off his 2018 season in the #2 Eximm / Miles Advisory Partners / Garage1 entry and aims to improve significantly on his fourth place finish in the 2017 National Series.

16-year-old Ivanhoe Grammar Year Eleven student Courtney Prince makes her National Series debut although she ran much of the series and the Victorian competition in 2017.

The only lady racer in the Sonic Motor Racing Services line-up this year the energetic Yarrambat Victorian will pilot the #3 Dragway Performance Engineering / Gallagher, Simworx and Wurth Australia backed entry in 2018.

16-year-old Victorian Angelo Mouzouris is determined to improve on what he sees as a ‘learning year’ in 2017 as he wheels the #4 Mantel Group entry into the 2018 National series.

The St. Bedes High School student from Mentone enters only his second season of competition and hopes to make an impact under the watchful eye of vastly experienced Formula Ford mentor Mick Ritter and the Sonic team.

Ribarits would be delighted to emulate fellow Sunraysia racer Cam Waters who won the 2011 Australian Formula Ford Championship under the Sonic banner and is now a Sandown 500 winner and Supercar front runner.

“We’ve got an exciting lineup of four promising young racers,” says Mick Ritter, “we’re kicking off the Series at Winton which is a bonus for us given the fact that we do most of our testing there. It’s an exciting time for Sonic as we chase a hat-trick of Formula Ford national series wins.”

Max Vidau scored the 2017 Championship with Leanne Tander breaking through in 2016.

This weekend’s first round at Winton Motor Raceway as part of the exciting Australian Motor Racing Series is the first of seven rounds of competition including Queensland Raceway for Round Two.