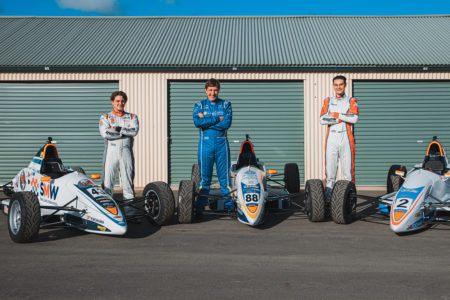 Some impressive results and a huge accident in the final race has highlighted a big weekend for Sonic Motor Racing Services at Wakefield Park Raceway for Round 2 of the Australian Formula Ford Championship this weekend.

Young gun Valentino Astuti was the pick of the Sonic trio, qualifying fourth, before claiming his first-ever Formula Ford podium in Race 1 in just his second race car meeting.

In Race 2, he slipped back to fourth place before walking away from a nasty roll over in Race 3 after contact with Spectrum driver Jake Donaldson at the bottom of the hill.

Astuti was able to walk away, shaken, but otherwise uninjured.

The incident brought out the red flag, meaning that no points or results were awarded for Race 3.

Harrison Goodman qualified a strong seventh and ran as high as sixth in the opening stages of the first race, only to slip off the road after contract with a rival, eventually coming home in 13th place. In Race 2, he raced his way back up to ninth, and moved even further ahead in Race 3, despite a spin on the warm-up lap, but it was all for naught when the race was red flagged.

Team and category debutant Jac Preston qualified 16th and made great strides in Race 1, claiming a top 10 finish on debut. In Race 2, the 18 year-old ran comfortably in 11th for most of the race, only to slide down the order on lap seven, eventually taking 16th.

The next round of the Australian Formula Ford Championship will be held at Winton Motor Raceway on June 11-13.

“The weekend started well. Our car has a lot of pace and we’d set it up really good,” said Astuti.

“The first race was good. I had a decent start and had some decent momentum to keep with the leaders and had a good battle with Noah (Sands), and finished that battle in the last corner and got third.

“The second race was close. We fought hard, but in Race 3 into the fish hook, and I was going to dive up in the inside and I’ve just gone over the top of him. He braked a little earlier than I anticipated, which is when I mounted the side of him.

“It was pretty scary –  watching the ground, sky, ground flash before my eyes. My right shoulder is in a little bit of pain, but I’ll be alright.

“I feel like I’ve learnt a lot this weekend, how to control the car and just picked up a lot of pace. I’m looking forward to keeping that pace going at Winton.“

“I got taken out by one of the other drivers when he bombed me from a long way back in Race 1 and I got pushed off the road,” said Goodman.

“It doesn’t really help with the position and it just put me on the back foot for the rest of the weekend.

“Pace wise, it was good. We had some good bits and improved with some of my driving as well.

“Hopefully Winton will be better. I understand the car, having driven there a bit. Having a better understanding of the car and track will be an advantage, and hopefully we start the weekend off well and finish the weekend off better.”

“Overall, the weekend didn’t go exactly how I wanted, but we made good progress and speed in the races,” said Preston.

“Qualifying was one of the biggest struggles, especially when the red flag came out, it threw things up in the air. There was also some spilt oil on the track, so that was a difficult session.

“The biggest challenge I found was getting used to the braking. It’s very different to karts, but it was just part of the learning curve.

“We made progress forward and I guess I’m happy with how the weekend ended. I’ve been to Winton before, so that will be a small advantage for me and I’m looking forward to it.”