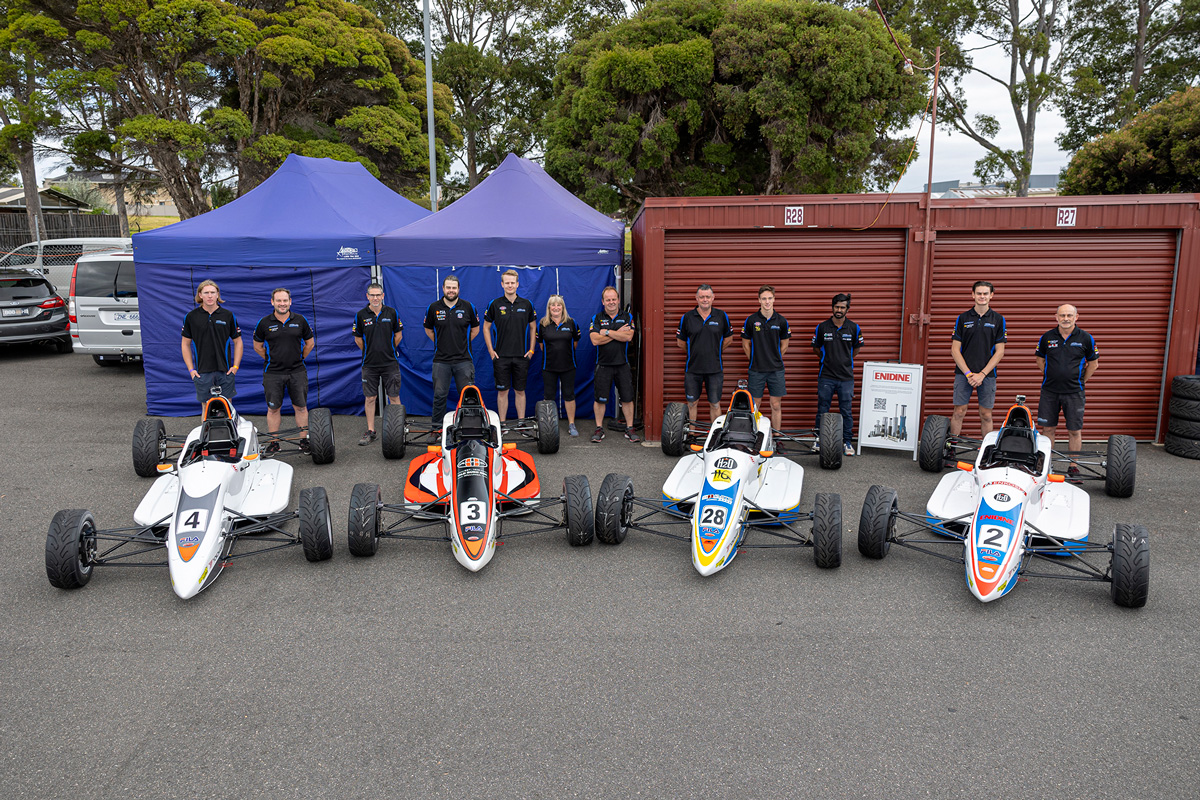 Sonic Motor Racing Services is pleased to reveal a five-strong driver roster for national and state-level Formula Ford competition in 2022.

Regarded as Australia’s most successful Formula Ford team, the Sonic squad will field Valentino Astuti and Winston Smith in the Australian Formula Ford Championship, while Matt Hillyer, Harrison Blanchard and Jake Santalucia set to compete in the Victorian state series.

Kicking off at Sandown Raceway this weekend as a combined event between both the Australian and Victoria titles, Sonic will field four cars in the opening round, with Santalucia to miss the event due to a clash in his calendar.

The 2022 season marks Astuti’s second attempt at the national series, having gone through the highs and lows of motorsport last year. In what was his first season of car racing, Astuti quickly found himself at the front of the field, only to endure a violent roll over accident at Wakefield Park. In 2022, Astuti is back and keen to cement himself as a leading contender in the category.

Joining him in the national class is Winston Smith, who moves up from the Victoria series after finishing runner-up at the state level last year. Smith showed incredible maturity last year and will be one to watch in the tough national class.

Harrison Blanchard is back for his second year in Victorian state, balancing work commitments with his passion for racing, and aiming to leap into a consistent podium threat.

New to Sonic in 2022 is Matt Hillyer and Jake Santalucia. While Santalucia will miss the first round, Hillyer, 17, is looking forward to tackling his first serious car racing challenge with the champion team.

The action kicks off at Sandown today with practice ahead of qualifying and racing on Saturday and Sunday.

“It’s great to welcome back some drivers and introduce a new wave of talent into the Team Sonic Formula Ford ranks,” said Ritter.

“Valentino and Winston are ready for a real crack at the national Formula Ford crown. When they came to us last year, they had little to no car racing experience, and they’ve both proved they will be a threat this year. I’ve been impressed with their testing and I’m confident that they will continue to learn as the season goes on.

“Matt and Jake are our two new young state racers, and like Valentino and Winston, they come to us basically straight out of karting. We’re all looking forward to seeing how quickly they come to grips with the Formula Ford, but from what we’ve seen in testing, they have the ability.

“And it’s great to have Harrison back too. Not only is he determined to move forward in the field, he continues a great dynasty that our team has with the Blanchard family.”

“We have done some testing at Winton ahead of Sandown. It was good and I feel like we are ready to take the next step,” said Astuti.

“We’ve been trying a lot of different things on the car and looking for that extra bit of pace – both in myself and the car.

“I came into last year’s championship open minded and there were plenty of guys on the grid with more experience. The first round in Sydney was a break-in round, and after that, I moved up the field quite quickly. At Wakefield Park, I was up the pointy end, but then we had the roll over which didn’t help.

“I still ended up sixth in the championship, despite missing a round, but last year was learning. This year, I’m fully focused on winning the title. I want to progress my racing path from here on, so I’m looking forward to having a real crack.”

“This year is about focusing on putting the right foot forward. I have a series of short term goals, and hopefully that ends up with some strong results by the end of the season,” said Smith.

“I was happy with last year. It was a learning year, so to come second in Vic state was a pretty good result.

“I’m coming into Sandown with good confidence. It’s all about executing on our plans and the results should come to us.

“Sonic has been awesome to work with. I love being in their team. I feel at home, so we’re all really excited to see what the year holds.”

“I’m looking to have some stronger results than last year. I finished fifth overall so I’m aiming to improve on that,” said Blanchard.

“Consistency is the most important thing for me. I did a bit of testing over the break, so my focus is really on chasing general consistency in me and the car and improving my results year on year.

“The Blanchard / Sonic partnership has been 15 years in the making. It’s a long-running friendship and we really trust them to prepare the best car and get the most out of me. It’s always great to know that the team has your back when you get to the race track.”

“I’ve a few test days with Sonic and I’ve progressed through that and enjoyed it,” said Hillyer.

“Straight out of karting with just one car race under my belt in Hyundai Excels, I’m throwing myself in the deep in, especially this weekend at Sandown mixed in with the national drivers as well as the state guys. The advantage is that it will fast track my learning.

“The Formula Fords are great fun to drive. They are obviously a lot quicker than karts, and a bit looser. The environment in the team is really good, too. Everyone is helpful and friendly.

“But I’m going to give it my best shot, and learn and progress as best I can.”