Solid result for Quantock and Farmer in Hyundai at Canterbury

Solid result for Quantock and Farmer in Hyundai at Canterbury 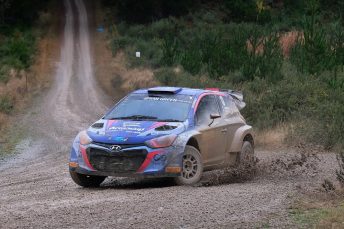 Quantock, the Hyundai NZ Young Driver Scholarship winner, fulfilled the pre-event goals set by him and Hayden Paddon, who co-manages the Hyundai New Zealand Rally Team with his father Chris Paddon, to finish the rally.

“The conditions hard, a bit of everything,” says 22-year-old Quantock of the wet, cold and muddy Canterbury Rally which formed the third round of the New Zealand Rally Championship on 4 June.

“It was a great learning curve, a pretty hard way to learn, but we still got there in the end. It was all valuable seat time, that was the main thing.”

Quantock says: “We picked our moments and didn’t do anything silly. In the slippery stuff, I aimed to just keep it the middle of the road. When there was more grip, we’d have a bit more of a go. The main goal to finish, so it was really good to do that, especially when quite a lot of the field didn’t.”

Paddon followed Quantock’s progress on the one-day rally from Europe and was pleased with how everything went for the young driver on his first event with the Hyundai NZ team and with Farmer alongside as co-driver.

“The conditions during the rally were treacherous for everyone, especially Job who was trying to adapt to a new and very different car,” says Paddon. “But Job did exactly what we asked which was to finish and gain experience for himself. The car ran faultlessly throughout which is testament to the effort the team are putting both in preparation and during each event.”

Quantock adds: “Everything went well with Jason. Pretty much from the first corner it felt like he’d been sitting there all year. He’s professional and slotted in really nicely. Also, I get on him really well, so that was perfect.”

Of being part of the Paddon Rallysport team, rather than running his own car as he is at the other four NZRC rounds, Quantock said: “There’s great team work with the Paddon crew. It was pretty cool to slot in with the team and see how it all worked, but also a little odd getting out of the car and not really having anything to do with the car. Normally we’re pretty hands-on, so it was nice to concentrate on my driving for the whole rally.”

This was the second time Quantock has contested his home rally which includes two full night stages. “Quite a few stages were different, but used in-car footage to review where we could, so that all worked well too.”

The next event for the Paddon Rallysport-run Hyundai AP4+ rally car is Rally Coromandel on 26 August where Paddon will take the wheel with John Kennard in the co-driver’s seat. Quantock is the driver again for Rally Waitomo in October, and Paddon will again return from Europe for the two-day, Tauranga-based Rally New Zealand in November.

Meanwhile Quantock will be seeking to learn all he can at as one of eight young competitors selected to participate in the New Zealand Elite Motorsport Academy which gets underway in Dunedin in July.