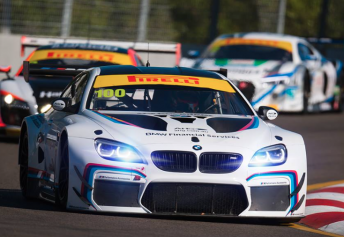 On what was a confidence-building first day on the streets of Townsville, Richards kicked things off by setting the sixth fastest time in practice.

Twigg then took over the #100 BMW M6 GT3 for the first of two qualifying sessions, going 11th fastest in a session that was interrupted by a red flag and plenty of traffic.

“There was a red flag just as we got up to speed, and then everyone went out at once at the end. I probably lost my best two laps, so what we ended up with was our third-best lap,” said Twigg.

“I think we’re better than what we’re seeing at the moment, because the car felt really good. Steve was really quick in practice, and my pace was strong as well, so I think we can be happy with where we’re at.”

According to Richards, who will take over the car in the morning, the second session will be a fresh opportunity to improve on that provisional starting spot, particularly as the slippery street circuit continues to rubber in.

“Max had a lot of traffic to deal with, and we reckon one of his laps would have been good enough for a spot well inside the Top 10,” said Richards.

“Tomorrow’s qualifying session will play a big part in determining the grid, because the track will continue to improve between now and then.”