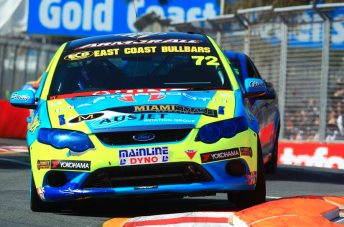 Buzadzic finished yesterday’s third and final race of the weekend in 11th position, which – following on from his 16th position in Friday’s opener and season-best seventh placing in Saturday’s race – placed him 11th overall for the weekend.

“It was nice to get through the race without any Safety Cars, and to be able to settle into a rhythm,” Buzadzic said.

“Early in the race, Mason Barbera tried to overtake me and there was some contact, which slowed me up a little bit, but otherwise it was a fairly trouble-free race and my pace wasn’t far off the leaders.

“As has been the case all season, my race pace is a lot better than my qualifying speed, so I need to qualify further up the field to give myself a better chance of bringing home the big results.

“I’m going to do a test day before the last round of the season at Homebush, where I will definitely be concentrating on qualifying technique.”

Buzadzic’s ute was prepared for the weekend by Matt Stone Racing, and he paid credit to the team for their preparation efforts.

“The ute was extremely well-prepared for the weekend and the entire team at Matt Stone Racing did a great job, while my chief mechanic Jason Kneebone worked very hard for the entire weekend, so he deserves a lot of credit as well,” Buzadzic said.

“Fortunately, we came away from the weekend with virtually no damage; there might have been the odd panel scrape, but all the major mechanical components are totally unscathed.

“Unfortunately, the same can’t be said for a lot of the other cars in the field, so my new panel shop on the Gold Coast, Miami Smash Repairs, might be picking up some extra work in the next couple of weeks!

“Thanks also to Evan Kaye and the entire team from Masterbooth, who have been great with their support once again. Bring on the final round in Sydney!” Buzadzic concluded.

The eighth and final round of the East Coast Bullbars V8 Ute Racing Series will be held at the Coates Hire Sydney 500, 4-6 December.