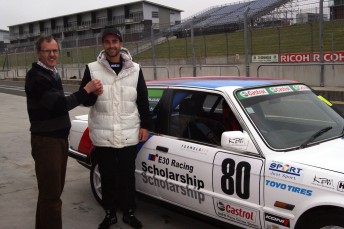 Tested across a number of disciplines during an evaluation day at the Hampton Downs motor race venue Grooten’s snow and water skills edged him ahead of those with a more exclusive driving background. Impressing judges Mike Eady and Greg Murphy, Grooten was awarded the car as part of the extensive scholarship package.

“It was all a bit overwhelming,” 25-year-old Grooten said of the win.

“It didn’t sink in straight away and with all the congratulations it began to dawn on me that I’d done it.

“I’ve got to get my head in the game now – it’s only two weeks until the first event so I’ve got plenty to do in preparation. It’s a pretty incredible opportunity.”

With the 2.0L BMW race car to use for the six-round North Island based season, Grooten’s rookie campaign is bolstered by a tyre, brake and lubricant package – along with a race engineer and payment of registration fees.

Having recently returned from a three-year off-shore jaunt, Grooten has always been keen on cars, admitting his childhood aspiration was to be a ‘race car driver’.

Competitive surfing and success in snowboarding gave way to university studies – which curtailed his fiscal ability to indulge in his true passion.

“I thought the first time was a once in a life time opportunity, yet I ended up going two more times with each year better than the previous.

“Now, just recently I have arrived back in New Zealand, found myself a fantastic job in the family business, Dad’s Pies, where I am acting as the marketing/branding ambassador and now have the opportunity to become heavily involved in my childhood dream.

“I’d never done any circuit racing before so when I learned about the BMW scholarship felt it was the ideal opportunity – and really really wanted to win.”

Experience and success in the boardercross (Boarder X) snow discipline is what Grooten believes is his key to being successful behind the wheel. “Racing is about the lines – it’s a skill that transfers from one sport to another.”

Needing to put that in to practise Grooten’s first outing will be the season opening round at Waikato’s Hampton Downs circuit 13 to 14 September.

“Initially I’m going to start off all ears – learn from everyone else, take in all that I can and build some knowledge before I see where I fit in. Then I can set some goals and decide where I can get to next. I really want to focus on improving my own skills.”

Fellow judge and top driver Greg Murphy took time out during the announcement to reflect on a parallel scholarship win that got him started in motor racing.