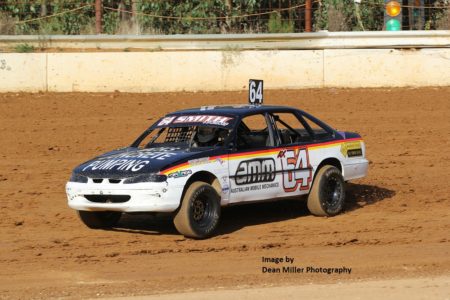 The first night of Redline Raceway’s season is in the books with a great night for family to sit back and enjoy motorsport in the Ballarat region and just forget about the worlds struggles for a few hours. An important feature event for Sports Sedan’s headlined the show with Dale Smith winning the Sports Sedan Masters whilst other wins were claimed by Scott Whittle, Jason Degoldi, Carter Metcalfe, and Jacob Tinworth.

Eighteen competitors signed in for the Sports Sedan Masters feature night with Corey Knox a leader for some time against a tough field of runners from Melbourne’s east and local Ballarat racer Zac Swanson. Mechanical breakdown for the machine of Knox put him out of the running with Dale Smith going on to take over the race on his way to a big win. Smith defeated Josh Service, Swanson, Tristan McGraw, and rookie driver from Ballarat Paul Blake.

Scott Whittle the Victorian champion in Standard Saloons did not lose a race all night, his two heat races and then the Standard Saloon final painted ominous signs for the upcoming 2020/21 state title on Labour Day Weekend. Behind him good friend Craig Templeton and Matthew Domburg battled for second and third whilst Whittle maintained the front running spot. Whittle over fifteen laps was too good for Domburg, Templeton, Aaron Marshall, and his very own employee Mark Seller.

In the racing for the future stars of the sport in their up to 1500cc Junior Sedans Carter Metcalfe from Mildura took the feature race win in the Top Stars category. Metcalfe led all the way to secure victory over Linken Paterson a recent Avalon Raceway winner, Luke Cornfoot, Bailey Rumler from Ballarat, and River Paterson.

From lap two in the New Starts category, Jacob Tinworth moved into the lead on lap two of ten to go on to beat Christina Oliver by almost five seconds with Maddy Capon, James Oliver, and Tamika Simpson. Tinworth locked in a new twelve lap record as he won the final.

Redline Raceway will be back on March the 13th for the Victorian Modified Sedan state Title with support from the Street Stocks, AMCA’s and Standard Saloons.