The Smith and Jones Show at Archerfield

The Smith and Jones Show at Archerfield 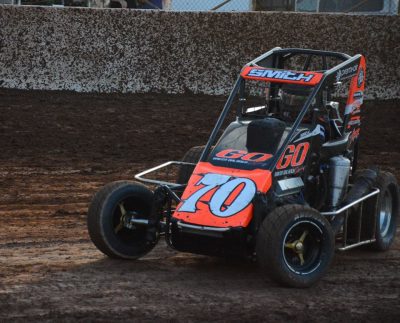 Interstate drivers dominated at Ausdeck Patios Archerfield Speedway on Saturday night (May 5) with NSW’s Matt Smith outpacing and outlasting an international field to win the American Tire and Racing Services Jim Holden Memorial Midget 50-lap feature race, while South Australia’s Ryan Jones proved too strong in the Queensland Sprintcar Championship Preliminary feature. On a night that produced misfortune and marvellous moments in equal measure, it was Scott Farmer and Rusty Whitaker who filled the minor placings in the Midget main, with Andrew Scheuerle and Jayden Peacock doing likewise in the Sprintcar feature.

Smith set the pace from the get-go, topping the time sheets in time trials with a 13.513 lap to outpace Kiwi duo Taylor Clarke (13.944) and Hayden Williams (13.979), with Darren Vine (13.995) fourth fastest and the best of the locals. Cal Whatmore, Brendan Palmer, Jason Bell, Whitaker and Anthony Chaffey rounded out the top ten.

Despite a rearward start as fastest qualifier, Smith was unstoppable in heat two and stormed home to beat Brendan Palmer and Farmer, with Williams outgunning Whittaker and Nathan Smee to win in heat three

Smith looked on track for another win the final preliminary until he found himself unable to avoid the stricken Brad Dawson in turn three. Restarting at the rear, Smith could only salvage seventh as Vine charged to the chequer to grab a fortuitous win in advance of Clarke and Chaffey.

As top qualifier, Williams drew a 10 inversion for the feature race grid, giving Chaffey and Vine the front row berths ahead of Jason Bell and Clarke. Farmer and Whittaker shared row three, followed by Smee, McCutcheon, Smith, Williams and the remainder of the 20-car field. The first start was abandoned with Vine deemed to have jumped, moving Clarke to the outside front row for the restart. Chaffey led the field away, only for his race to end on lap three when he slowed in turn three and handed the lead to Vine, who pounced as Clarke found himself baulked by the ailing Chaffey. Lap five saw the lead change again when Farmer moved to the front before the first interruption on lap six as a result of a spin by Dawson in turn four. Having already climbed to fourth, Smith continued his ascension after the restart and had deposed Clarke, Vine and Farmer by lap 13 to assume the lead. Vine headed infield on lap 24, handing third spot to Williams, who parked in turn three less than a lap later to bring on another restart. Having fallen as far as seventh, Clarke set forth on a surge that carried him back to second, only for Farmer to regain the position prior to the final restart with 16 laps remaining. Smee was a casualty at this point, joining Williams, Ware, Bell, Nathan Mathers and Mitchell Rooke on the infield. At one stage looking as though he might reel in Smith, Clarke was unable to replicate his success from Sydney the previous weekend and eventually faded to fourth as Whittaker pounced to grab the final place on the podium. Behind Clarke in fifth came Brad Harrison, with Brad Young, Mark George, Dallas Sharp, Tim Farrell and Paul Murphy the only others to go the distance. Chris McCutcheon made a late charge that ended on lap 42 when contact with countryman Clarke flattened a tyre and put him out.

In Sprintcar time trials, Luke Oldfield was a cut above the rest and the only driver to go under 12 seconds (11.824), outpacing Bryan Mann (12.065), Peter Lack (12.086), Jones (12.093),Peacock (12.135).and the rest of the 31-car field. Lachlan McHugh failed to set a time with a problem that proved serious enough to put him out of action for the night, while Oldfield’s reign didn’t last long because he failed to start in the opening heat, heading infield as the field formed to await a restart.

Heat winners were Jones, Peacock, Scheuerle, Mark Pholi David Whell and Kristy Bonsey, with Mitchell Gee another fancied contender to suffer a setback when he crashed out of his opening heat.

Starting from pole position in the 20-lap preliminary feature, Ryan Jones led throughout in a race that suffered only one interruption when Allan Woods stopped on the main straight on lap seven. A late charge from Scheuerle saw him round up Peacock to snare second spot, with Michael Saller continuing his great run of late with a fourth-place finish. Lack was next in line ahead of Pholi, Whell, Kevin Titman, Brent Kratzmann.

In other feature race results, Liam Williams won in Formula 500s ahead of Tristan Johnson and Ryan McNamara, while the Lightning Sprint feature saw Jeremy Hassall down Araron Kelly and Justin Purlo. It was Michael Taylor prevailed in the Open Sedan feature race, downing Keith Craft and Les Eisenmenger.