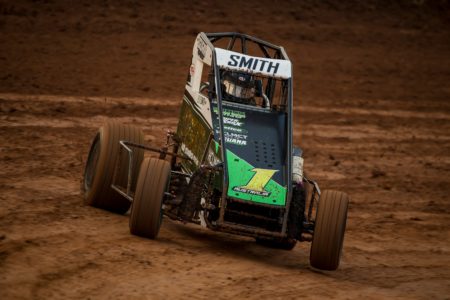 There is question about it in the 2019-20 season, youngster Bodie Smith is the form driver in the state of Queensland in the Compact Speedcars and he is also one of the most improved Speedcar drivers in his home state.

On Saturday night, Smith collected his fifth Compact Speedcar feature-race win in a row at his home track of Brisbane’s Archerfield Speedway, while over the past month in the Speedcar, he has recorded two standout performances, which was highlighted by a third-place finish at Archerfield Speedway.

Although the 17-year-old racer is enjoying a pleasing second season in senior speedway competition, it’s certainly been a busy one.

“Since the beginning of the season, I have rarely had a weekend off, but it’s allowed me to get plenty of track time and gain a lot of experience along the way,” commented Smith, who resides in the Brisbane, Queensland suburb of Cleveland.

“None of this would be at all possible without the support of my family, my pit crew and valued sponsors, and I’m very grateful for all of their support and it’s very satisfying to be able to go out on the track and bring back some good results for them.”

Smith, who is the current Australian Champion, is enjoying a five feature-race winning streak in the Compact Speedcar class aboard his Aus # 1 Yamaha R1 powered Razor car and as a result of this he is one of the leading contenders in this season’s Queensland Club Championship point standings.

In the Speedcar, which is the Qld # 77 Ed Pink Ford powered Spike that is owned by his uncle Craig, Smith has this season run a limited number of race meetings, mainly due to his Compact Speedcar commitments. However, over the past month, he has shown plenty of promise and this saw him breakthrough for his maiden minor podium feature-race finish. This took place at Archerfield Speedway in a recent Polar Ice Series round and he then backed up that performance with a fourth-place finish at Toowoomba’s Hi-Tec Oils Speedway after he had qualified for that feature race out of position two.

For the rest of the season schedule in the Speedcars, Smith and his team are looking forward to contesting the Queensland Title on the Sunday night of April 12 at Hi-Tec Oils Speedway and the Brisbane 50 Lapper on the Saturday night of May 16 at Archerfield Speedway.

Special thanks must go out to Smith’s dad and crew chief Brett, pop Ian, uncle Craig, and Stephen Bell from Jettco Developments.

To find out more about Smith and his team, LIKE them on Facebook by searching Smith Bros Racing.