Slovakiaring as next stop for the Reiter Young Stars!

Slovakiaring as next stop for the Reiter Young Stars! 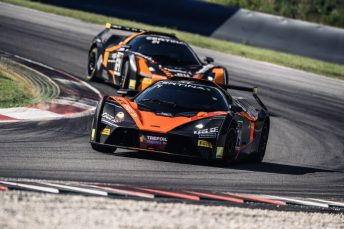 The “REITER YOUNG STARS” competition goes seamlessly into the second half of the season with rounds five and six at the Slovakiaring, and the points situation could not be more exciting. Three of the top eight in the overall standings won’t race at this circuit located close to Slovakia’s capital Bratislava.

Therefore it is Norwegian Mads Siljehaug who has the biggest chance to further strengthen his good position in the fight for the title. His closest rival is his RYS Team InterNetX (#64) colleague Jamie Vandenbalck (BEL), followed by RYS Team Holinger’s (#24) Emil Westman (FIN), and Samuel Sladecka (SLO).

And the races this weekend will be very emotional for Samuel Sladecka, the RYS winner of round two at the Red Bull Ring, because he will be competing “at home” at the Slovakiaring, and in front of many of his friends and fans in the pits, and in the stands. But it will not only be an exciting weekend for Sladecka. Three teams will have new drivers at this, the third event of the season.

The RYS Team Kiska (#34), currently in a sensational second place overall in the GT4 European Series Northern Cup will have a very strong driver duo. KTM X-BOW GT4 newcomer Josef Zaruba will share the cockpit with Erik Janis, who has already been on the top step of the X-BOW BATTLE GT4 winner’s podium. August Macbeth (USA), who has been active in the Skoda Octavia Cup, will race in RYS Team Pankl (#54) with Germany’s Benjamin Mazatis. And in the RYS Team Schönramer (#84), Austria’s Achim Mörtl, who was on pole and picked up a podium place finish at the Red Bull Ring, will be racing for the first time with Romanian Eduard Anton. Anton already has experience in the GT4 European Series and now changes brands of cars.

Naturally, the other teams will want to have a say in the race to pick up the best possible overall place and earn the points in the REITER YOUNG STARS competition. The RYS Team KTM (#14) with Austrian driver pair Eike Angermayr/Reinhard Kofler, and the Austrian/Swiss combination of Laura Kraihamer/Cedric Freiburghaus in RYS Team True Racing (#74) are all very motivated as is the fast RYS women’s team WP (#44), with Switzerland’s Marylin Niederhauser and South African Naomi Schiff. All of these teams will go on the attack right from the first practice session.

The fight for points among the student teams will also be exciting. Currently “WP” is in the lead in front of “Schönramer” and “InternetX”, while “True-Racing” and “Pankl” are within striking distance.