Skechers joins the team in 2018

Skechers joins the team in 2018 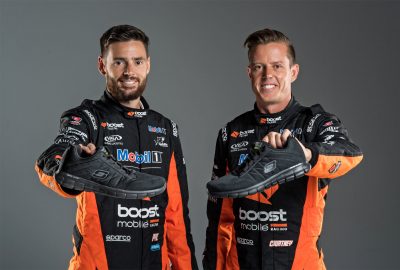 Not only will Skechers have branding on both James Courtney’s No. 25 and Scott Pye’s No. 2 livery, they will have an off-track presence as well, fitting out the team in footwear for 2018 in their performance and lifestyle range.

With a range of over 3,000 different styles, there is no doubt that Skechers is a global leader in lifestyle and performance footwear.

With undeniable style and comfort, the Skechers range is available at department, specialty and independent stores right around the country. Skechers also has 70 company owned retail stores across Australia and New Zealand, as well as online websites www.skechers.com.au and www.skechers.co.nz.

Outside of Australia and New Zealand, Skechers products can be found in more than 160 countries and territories around the world.

Mobil 1 Boost Mobile Racing General Manager of Motorsport, Mathew Nilsson, said it was great to have a such a renowned global company join the team in 2018.

“There’s no denying the quality and comfort of Skechers products, so to have them join the team this year is fantastic,” Nilsson said.

“As a team with an international footprint, it’s great to be able to join with partners who have a presence right around the globe. We can’t thank the team at Skechers enough for their show of support this year, and there is no doubt we will be the envy of other teams up and down pitlane thanks to our footwear. If you haven’t already, do yourself a favour and get a pair today.”

Echoing the sentiment of Mr Nilsson, Deena Colman, Head of Skechers Marketing, is excited to see the Mobil 1 Boost Mobile Racing team kitted out in the latest styles from Skechers.

“At Skechers, we pride ourselves on providing the best footwear in the lifestyle and performance sector, and we can’t wait to see James, Scott and the rest of the team wearing their Skechers across Australia and New Zealand this year,” Deena said.

Skechers will be first seen on both cars at the upcoming Supercars test day at Sydney Motorsport Park on Friday February 16, before hitting the streets of Adelaide on March 1-4.