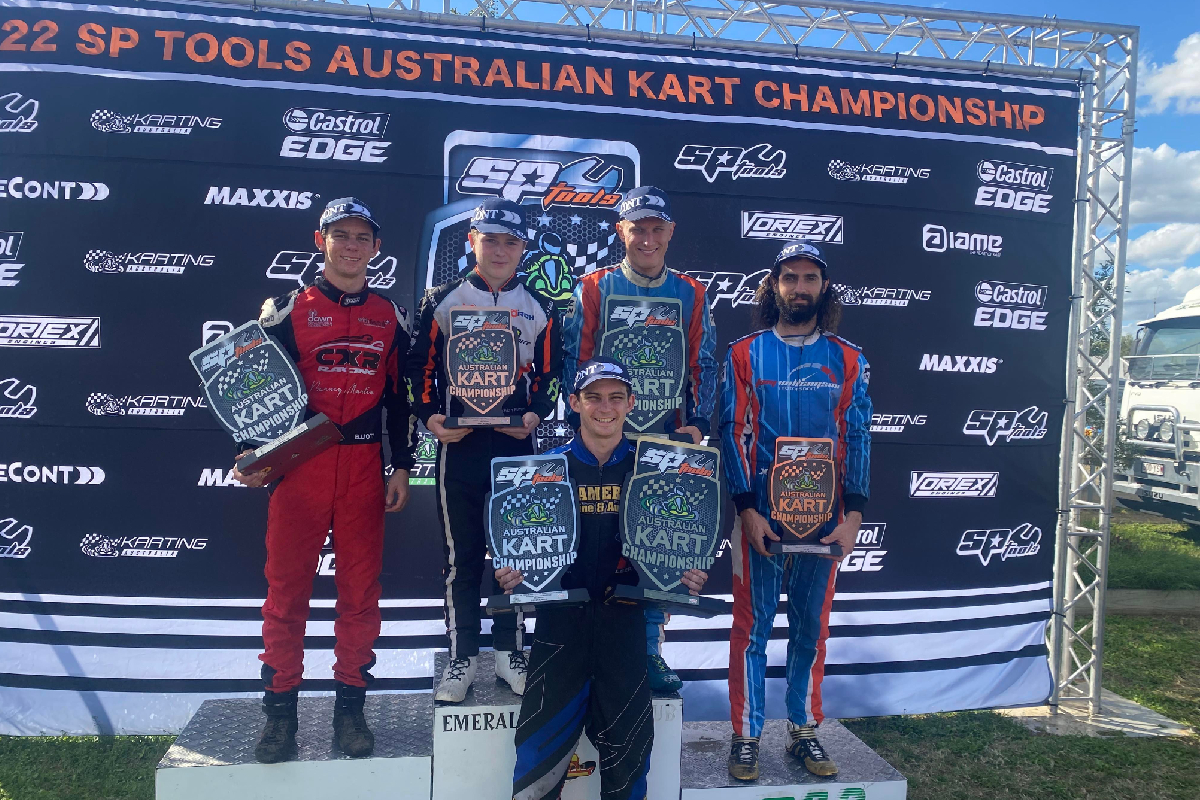 CXR Race Engines took a strong team of five drivers across three classes to the rural town of Emerald for the fourth round of the SP Tools Australian Kart Championship.

CXR Race Engines has been making waves with stable star Jace Matthews and multiple other drivers bringing home strong results in the championship.

With live chances in all three classes, the team was ready to chase hard for solid results.

Matthews set qualifying pace to put him out of third spot overall, with Marcon just outside the top ten in position twelve.

Heard was only able to set one lap in qualifying, putting him out of position thirty seven with plenty of work to do.

Matthews never left the top three in his four heats with two wins putting him off pole position for the final.

Marcon was able to move his way forward with a fifth in heat two, and third in heat four, putting him right in the battle.

Heard put in some remarkable driving making up a total of fifty three spots in the opening two heats.

This cumulated in a heat three win and fourth in heat four.

All three drivers had their chance of victory in the final, with Heard able to break away from the pack mid race and take out a remarkable round win.

Jace Matthews and Lachlan Platten were up next in the KA3 Senior class against a high quality near 40-kart field.

Matthews showed why he’s got the Australian number one on his kart, setting the fastest time in qualifying and putting himself on pole position.

Platten was able to do a remarkable job landing inside the top five with the fourth fastest time.

Matthews put in a consistent and stellar performance winning all four heat races putting him off pole position for the final.

Platten finished inside the top ten in all four of his heats, keeping himself up the front and in contention for a podium.

Matthews was able to lead in the early stages but dropped back to second spot in the middle portion of the race.

Jace was able to come home on the podium with a terrific second spot and leave the round with the championship lead.

Platten was able to put in his best performance of the weekend making the final podium spot in third position overall.

Jace Matthews was back out on track in the X30 class where he is leading the 2022 championship.

Matthews and the team didn’t quite nail the setup for qualifying, only being able to set the ninth fastest time.

Jace rebounded extremely well in the heats, coming home with two wins and second in his opening three heats.

Matthews was spun around in heat four, putting him back to fifteenth by the finish and he was starting out of position two for the final.

Jace was able to take the lead in the early stages and never look back taking his third round win of the season in the class aboard his CXR race engines powered entry.

“So proud of all the drivers using CXR engines – to get a 1-2-3 in Tag 125 with X30 engines is an awesome result for all involved,” Matthews said.

“Taking six podiums with so many different drivers is great to see.

“All were using FA and Kart Republic karts which we are the QLD dealer for- which was also a great result.”

CXR Race Engines will be back at the final round of the SP Tools Australian Kart Championship at the Newcastle Kart Club next month.