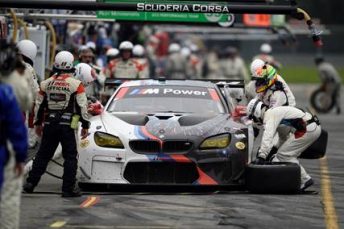 The Cambridgeshire-based racer and his co-driver had a solid and consistent race to maximise their championship points with just four races of the 2017 season remaining. They secured 25 points to maintain second place in the standings, just seven points off the championship leaders, and put the BMW duo in a strong position for the title fight.

With the field of GT cars very closely matched around the short 1.5-mile circuit, Auberlen qualified the car in eighth position, 0.5 seconds off the GT Le Mans pole-sitter. The American driver started the race for BMW Team RLL and maintained eighth position until he was able to take advantage of two colliding competitors and move up to sixth around 30 minutes into the two-hour, 40-minute race.

After 56 laps, he handed over to Sims who remained in sixth position for the first 25 minutes of his stint. He then began to move up the field, running as high as third for nine laps midway through his stint but was due to pit for a second time. He re-joined the field and was running in sixth, continuing until lap 126 when he pitted for the final time. For the remaining 45 minutes of the race he maintained position to cross the finish line sixth.

“After winning the last two races I’ve got to admit we were a bit disappointed not to be up there again today,” said Sims. “We were struggling for pace this weekend but our sister car had a better race and finished third; it’s great to see them having some success as well. We’ve now had four consecutive races with BMWs on the podium so it’s good to show how strong the M6 GTLM is.

“We’ve only got two weeks until the next race in the States and I’d like to see us back on the podium at Road America,” he adds. “Now though, I’m turning my attention to the Total 24 Hours of Spa. I’ll be in the GT3 version of the M6 there with Rowe Racing next weekend and we won last year so we’ll be looking to defend our win!”

Gruelling endurance classic, the Total 24 Hours of Spa, takes place on the 29-30 July at Spa-Francorchamps, Belgium, with the IMSA WeatherTech SportsCar Championship resuming just one week later on 6 August at Road America in Elkhart Lake, Wisconsin.