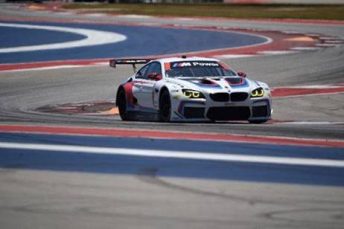 Alexander Sims scored his first career IMSA WeatherTech SportsCar Championship podium in the Advance Auto Parts Sportscar Showdown at Circuit of The Americas in Austin, Texas (US), on 6 May 2017, coming second in class for BMW Team RLL in the No. 25 BMW M6 GTLM.

Sharing the car with co-driver Bill Auberlen for the two-hour, 40-minute race around the technical COTA circuit in Texas, Sims had an impressive drive throughout, and ultimately missed out on the win by less than 2.5 seconds.

A crash at the first corner took several GT Le Mans class competitors out of the running, while Sims slotted in second behind John Edwards in the sister BMW Team RLL entry, with the two M6 GTLMs running one-two for the first 14 laps.

The Cambridgeshire driver had started the race third following an impressive Qualifying run that put him only 0.125 seconds down on Edwards, who took the class pole.

Sims and Auberlen ran a consistent race for the remainder, rarely dropping out of the top three. Unfortunately, a miscue meant that Auberlen attempted to leave the pits before the fuel hose had been removed, resulting in a pit-stop penalty with 90 minutes to go. This dropped Auberlen to fourth but before long he was back up into second.

COTA debutant Sims got back into the BMW for the final hour, running second behind a Corvette for his entire stint. The third and final Full Course Caution was called late in the race for two laps, setting the field up for a two-lap shootout to the chequered flag.

Unfortunately, Sims was unable to catch the Corvette in those final two laps, but held on to finish second and just 2.498 seconds behind, while the sister BMW of Edwards and Martin Tomczyk completed the podium. It was the first podium finish for BMW Team RLL since Road America last August, and the car’s first double podium in IMSA competition.

“Today was a great day for us at COTA,” commented Sims. “The start of the season had been challenging at times so it was good for us to get a double podium and show how fast the M6 is! Bill drove an excellent stint that set me up for the final hour. The Full Course Caution helped to bunch up the field, and I although I came close I just couldn’t match the Corvette’s pace.

“It was a great weekend for us anyway, and gives BMW great momentum heading into the Nürburgring 24-hour race later in the month.”

Next up for Sims is the iconic and gruelling Nürburgring 24 Hours race, held on the challenging Nürburgring Nordschleife in Germany on 27-28 May 2017. He’ll compete with Rowe Racing, taking seats in both of the team’s M6 entries alongside six team-mates. His WeatherTech Championship season resumes at the Sahlen’s Six Hours of the Glen at Watkins Glen, New York, on 2 June 2017.