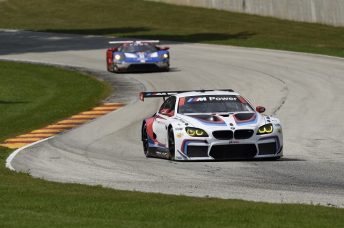 Alexander Sims finished sixth in the Continental Tire Road Race Showcase at Road America in Elkhart Lake, Wisconsin, USA, on 6 August 2017 after a promising start that saw him and the No. 25 BMW Team RLL BMW M6 GTLM running in second position for almost an hour in the first stint of the race, while also setting the fastest lap in class.

The Cambridgeshire-based driver qualified the car third with a lap time of 2:02.211 around the high-speed, four-mile, 14-turn road circuit to put him on the second row of the grid. At the start of the race, Sims soon made up one place and was running in second before pitting to hand over the BMW M6 to Team RLL co-driver Bill Auberlen on lap 25 for the middle stint of the race.

Auberlen continued the strong run but was forced to make an unscheduled pit-stop when the car suffered from a right front suspension issue. With the crew having rectified the damper problem, he made it back out on track and spent the next 30 minutes reclaiming positions before two safety car periods were called.

Sims took the wheel during the second yellow flag for the final 40-minute stint and continued to improve position, putting the BMW M6 back on the lead lap – the duo had climbed 15 positions since the unscheduled pit-stop. With Sims challenging for fourth in the closing laps of the race, unfortunate contact with the No. 4 Corvette on the final lap caused damage that put Sims back to sixth as he crossed the line.

Despite the challenges of the race, Sims set the fastest lap time in the GTLM class, a 2:02.789, to net him one extra championship point. He and Auberlen take away 26 valuable championship points from the famed Road America circuit. The two-time race winners are on 230 points and running third in the championship, just nine points shy of the current leading drivers. With three races remaining on the calendar, it’s all to play for.

“It was a very up and down race at Road America for us this weekend, with a very exciting end to the race,” Sims said. “The M6 worked well and we had really good pace here and that allowed me to set the fastest lap but an unscheduled stop and then contact on the last lap prevented us from finishing higher up the order. I was better under braking than the Corvette towards the end of the race and felt I was close enough to make a move on the last lap but by the time we entered the corner the gap had disappeared. It was a disappointing finish but the BMW Team RLL guys prepared a great car for us and the setup worked perfectly around the Road America track.”

The next race for Sims is the Michelin GT Challenge at VIR in Virginia on 27 August. With no prototypes racing that weekend, Sims and Auberlen will be fighting for the overall victory in the two-hour, 40-minute contest.

“I’m looking forward to VIR and with our pace this weekend I think we’ll have a real shot there. We had a GT-only race at Lime Rock Park in July and it’s always nice to be able to get an overall victory so maybe we can do it in Virginia.”