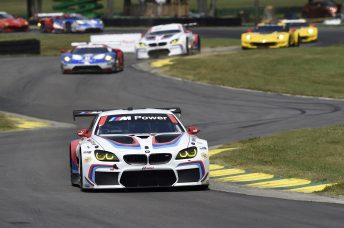 Alexander Sims has climbed to second position in the IMSA WeatherTech SportsCar Championship standings after an impressive run on 27 August 2017 in the Michelin GT Challenge at Virginia International Raceway in Virginia, USA. He and his BMW Team RLL team-mate, Bill Auberlen, dominated the majority of the race before an unfortunate puncture took the No. 25 BMW M6 GTLM out of the lead in the closing stages.

The British driver started the race from second on the grid after missing out on pole by just 0.2 seconds but had a strong start and took the lead on the opening lap. He led the field for the entirety of his first stint, increasing his margin every lap, until he pitted after 50 minutes of the two-hour, 40-minute race to hand the car over to co-driver Auberlen.

Auberlen took the overall lead in the GT-only race again when the pit stops had cycled through and remained out in front for the middle stint but was forced to make an early pit-stop when he picked up a puncture. The car didn’t lose any time and Sims got back in for the final hour, once again taking the commanding position after his rivals had completed their final stops.

Despite having to aggressively save fuel due to the unscheduled early pit-stop, Sims maintained position at the front of the field. However, on lap 84 with 15 minutes on the clock he suffered from a second puncture. He had no option but to bring the BMW back into the pits to replace its left-front tyre, but he lost ground in the process and came back out onto the track in fourth position.

With little over ten minutes left on the clock, Sims was unable to make up the lost ground and had to settle for fourth position at the line, finishing 28 seconds behind the winner.

Despite the disappointing result, after leading 84 of 93 laps Sims and Auberlen were still able to move up a position in the drivers’ championship standings, taking second place. With two races remaining, they are just 16 points behind the leaders and within grasp of the GT Le Mans class title.

“It’s not the result we wanted after such a good race but I’m still pleased we had a fast car here this weekend,” said Sims. “The BMW Team RLL guys did a really good job on the setup and we were fast all weekend. We had a good shot of taking our third win of the season here this weekend but it wasn’t to be.”

Another two-hour, 40-minute race at Mazda Raceway Laguna Seca is the final sprint round of the WeatherTech Championship season on 24 September 2017, before the ten-hour Petit Le Mans endurance race at Road Atlanta rounds out the year.

“We’ve got two races left and still a good shot at the championship. All the tracks this year are new to me so I feel very fortunate to have had such a strong year with Bill so far. Onwards and upwards to Laguna Seca!”