Simpson gets it done

Simpson gets it done 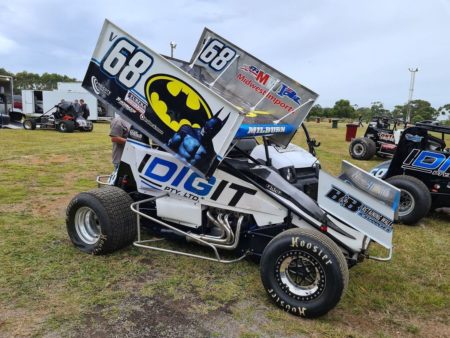 The much-anticipated opening night at Heytesbury Stockfeeds Simpson Speedway which featured the Southwest Conveyancing Sprintcar cup is in the books!
After minor rain delays, Track crew wasted no time in allowing racing to resume on what drivers described as a challenging first night back.

Fans were treated to a thrilling night of racing once under way in which Heytesbury Stockfeeds Simpson Speedway would like to thank all race fans that continued to support this event till the very end along with complying with covid safe protocols.

JUNIOR FORMULA 500
A strong field of ten cars took part in two rounds of heat races with Tyler Maggs being a dominant force from start to finish taking home both heats wins along with crossing the line in first place come feature time.

It wasn’t without drama through as stewards deemed Maggs had jumped on an earlier start resulting in a two-spot penalty with four laps left to run. Chad Bell & Tyson Balcombe had an almighty challenge as they did their best to fight off a hard charging Transport Equipment Hire V24 Tyler Maggs for the win.

Formula 500’s commenced their season at Heytesbury Stockfeeds Simpson Speedway. With V32 Matthew Turner kicking off proceedings with a heat win after inheriting the lead from Tim Rankin who suffered mechanical issues after a dominating stint prior.

Feature time seen a hard-fought battle over 18 laps, with Josh Buckingham getting to turn one ahead of Brock Rae and settling in for the full lap distance, while the likes of V14 Jett Speed & V6 Dylan Willsher had early speed but were forced to retire due to mechanical issues which elevated Hayden Pascoe to a podium position in third alongside Brock Rae who finished second.

With six different heat race winners the final was setup to be a battle of who could hold on and make the least amount of errors. The start seen Christopher Halesworth get out to an early lead followed by Mitchell Broome, as the race went on it was battle of race fitness as drivers battled a challenge track.

A late caution changed the game as they resumed in single file it was Brett Milburn who was most advantaged as he moved from 5th to finish 3rd with some pin point driving, Travis Millar was able to hold & maintain 2nd and Christopher Halesworth finished right where he started in 1st.

Second round of heats seen starting grids inverted which allowed T62 Tate Frost take full advantage of a front row start with a heat 3 win, while the busiest man of the night on double duties Brett Milburn rounded out heat winners for the night.
A Main produced an entertaining opening laps as drivers contented with a hooked-up track allowing passing at both ends.

V7 Paul Solomon got off to a flyer leading the pack for the first 7 laps before giving up the lead as turn 4 seen him get outside the groove allowing a line of drivers through.

T62 Tate Frost brought the caution lights on with 9 laps to run after running top 3 for majority of the distance, this allowed eventual winner Brett Milburn breathing space at the point from lap traffic.

Heat winner John Vogels was charging home picking up a second place after winning the battle with third place getter Peter Doukas who had slipped to 5th after a moment that almost turned costly in turn 4 after starting on pole.