Simmonds gears up for podium finish at AORC

Simmonds gears up for podium finish at AORC 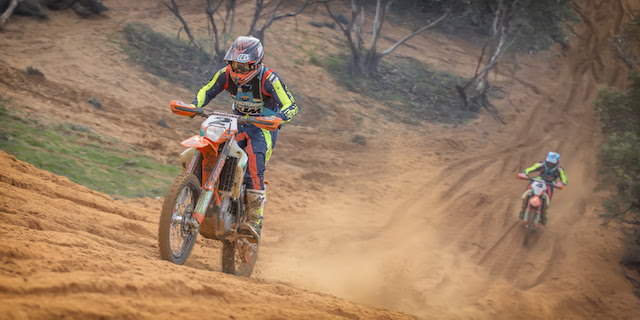 MEDIA RELEASE: The 2016 Australian Off-Road Championship is just heating up for New South Wales rider KTM Enduro Racing Team’s Tye Simmonds with some impressive results seeing him head in to Rounds 7 & 8 in Hedley in Victoria on July 23-24 with a new found confidence.

With the mid-season break coming to an end Simmonds has forgone resting pushing his limits in the 2016 Tatts Finke Desert Race, placing second and taking out a win in this year’s 2016 Hattah Desert Race.

Undeniably happy with his results in the E2 class we caught up with Simmonds who assured us that this was just the beginning and filled us in on his aspirations for the remainder of the season.

“Coming of the bike after Finke was a pretty unreal feeling, we put a lot of effort in to it, so it was really good to get the result that we were working for from myself, my dad and the team,” Simmonds started.

“Heading in to rounds seven and eight I am feeling pretty confident. I struggled a lot at the start of the season with tight and rocky terrain so to go to South Australian where it was more open with room to move and get some good results was a confidence booster.

Simmonds also shared what it is going to take to place his KTM machine on the top step of the E2 podium, and who is going to be his biggest rival out on track next weekend.

“I just have to keep striving for the same results as what I got the last round and just keep knuckling down and doing what I do to make the last six rounds count!”

“Chris Hollis has been the man to beat since the start of the season. He’s fit as a fiddle and he has been around the Off-Road scene for a long time so he will be the man to catch coming in to rounds seven and eight,” Simmonds concluded.

With the countdown on Simmonds and the KTM Enduro Racing Team will make the trek South to remote Victoria for Rounds 7 & 8 of the Yamaha Australian Off-Road Championship on July 23-24, 2016.