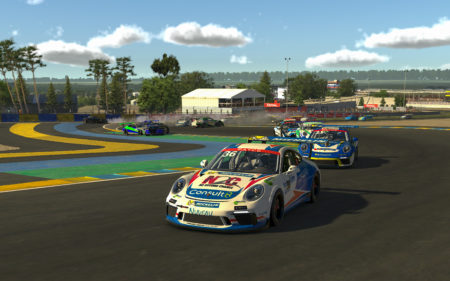 Thanks to eight dominant victories in the first five rounds, Cooper Murray enters the sixth and final round of the Porsche PAYCE & MICHELIN Virtual Cup as the Mobil Pro Champion, enjoying a 196-point buffer over McElrea Racing teammate, Harri Jones, in second.

With the absence of both Matt Campbell and Jaxon Evans for the final round, expect Matthew Payne and Cody Burcher to again challenge the leading Porsche PAYCE Carrera Cup drivers for line honours in tonight’s three sprint races.

By contrast, the Pro-Am battle is still wide open, with the top six drivers in the class standings all having a mathematical chance of clinching the title.
Matthew Belford leads the way after a strong second half to his season, with the ever-present Graham Williams in second – only 40-points behind.

Sergio Pires, Dean Cook, John Goodacre and Marcel Zalloua make-up the remaining quartet still in the hunt, but based on past form, it would require a drastic turn of events for the leading pair to be ousted from the podium, having thus far showed great consistency,.

After technical issues plagued Marc Cini’s campaign in the first three rounds, the last round produced a master class from the seasoned Carrera Cup driver and he will be a favourite for the Pro-Am class victory heading into the Silverstone circuit – which again will be hosted on the iRacing platform.

All three races in the season finale will be broadcast on the @PorscheMotorsportAU Youtube channels at 20:00 (Melbourne time) on Friday 17 July.