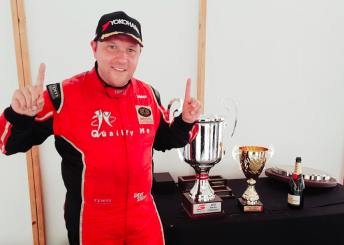 MEDIA RELEASE: Dave “Sideways” Sieders has won two races and the final round of the season on his way to taking out the 2016 Australian V8 Ute Racing Championship, as well as finishing second outright in the Toyota 86 Racing Series, on the streets of Homebush Olympic Park this weekend, 2-4 December 2016.

In the final outing for the Sydney circuit, the 32 year old from Western Sydney well and truly etched his name into the record books, finally recording an elusive Championship win, second outright in a brand new National Series, and his MangoCredit Holden will forever be the fastest V8 Ute at the circuit.

“It’s taken so much to get here, I just don’t think it has really sunk in yet,” said Sieders, “it’s amazing to think of everything we have achieved, the frustrations and the celebrations, it really has been a great journey”.

“To finally win it, win the round and reset the lap records on the final weekend that this track will be used seems so perfect. And to score another outright second in an National Series has definitely added to what has been a pretty big year.”

Sieders entered the V8 Ute Series in 2010, debuting with his first of 19 pole positions and setting him on a long journey that has included three runner-up titles and a third placing, with 28 race wins, 14 round wins, and a change from Ford to Holden, before he finally clinched the title in race two at Homebush this weekend.

“It’s definitely been a lot of hard work to finally win this title,” said Sieders, “we’ve always gone out with the goal of winning races, and being the fastest car on track, and this year it finally all went together to give us the Championship”.

Joining the inaugural Toyota 86 Racing Series, Sieders stayed in the hunt all season, even recording his own race win at Sandown.

However, brake issues had him fighting back from 18th on the grid in the final round, where he got his All-Trans Trucks race car up to ninth in the final race, with enough points to take out second outright for the season.

“It’s been a really fun year helping to develop the 86s with the team this year,” said Sieders, “running in the 86 also made it a full on season, pulling double duties with the Ute at some of the toughest tracks in Australia, so to be at the front of both is an amazing feeling”.

For Sieders, the 2016 Australian V8 Ute Championship is the first National Championship he has won, since starting in the sport in 2004.

“It’s been a long time coming, and I know the whole team is keen to celebrate accordingly.”