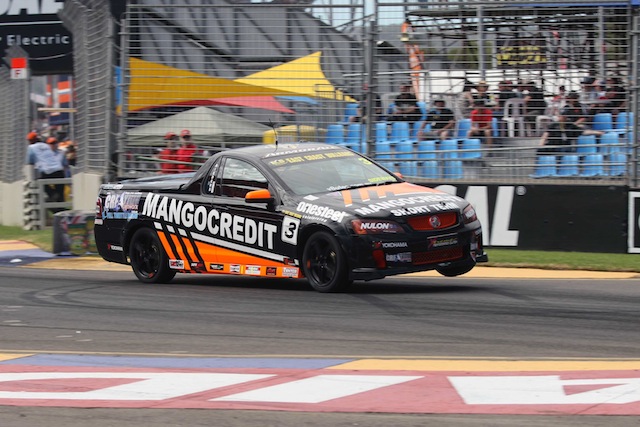 MEDIA RELEASE: V8 Utes – The change of marquee in the off season has helped Dave “Sideways” Sieders join forces with Suttons Parts before heading across the country for round two of the East Coast Bullbars V8 Ute Racing Series at Barbagallo Raceway (Perth, WA) this weekend, 1 – 3 May 2015.

As a division of ‘Australia’s largest and most trusted family owned auto group’, Suttons was a natural fit with the family run-Sieders Racing Team, with the new deal for Sieders’ Mango Credit Commodore to also benefit teammate Rhys McNally, as well as holding real potential benefits for the category’s major chassis changes from 2016.

“Suttons shares a lot of business and personal values with the Sieders Racing Team, and we’re really excited to have them on board,” said Sieders.

“There are 16 manufacturers under the Suttons banner, but this is partnership is one that we couldn’t really look into until we made the switch to Holden”.

“With introduction of the V8 Utes’ EvolUTEtion platform next year, it’s opened the door for a range of manufacturers, and joining with the Suttons Motor Group now gives us a number of options to build upon in the future.”

For Suttons Parts, this new partnership has come from their recent involvement with the Team and their two Holdens, and has been seen as an ideal springboard to become directly involved with The V8 Ute Series.

“We only started dealing with the Sieders Racing Team this year, but we’re really excited to be able to take it beyond just commercial transactions,” said John Ragen from Suttons Parts Homebush.

“The V8 Ute Series is one of the most exciting categories in Australian Motorsport, and with some of the changes coming into the series, it’s a great opportunity for Suttons Parts to be part of”.

After a frustrating opening round, Sieders currently sits 70 points off the lead in 16th position in the series, however, after a seven week break since Adelaide, he has crossed the country full of confidence for a strong performance on what has been one of his toughest tracks to compete on.

“We had a couple of mechanical issues in Adelaide that had us drop cylinders in two races and really didn’t get the results we should have,” said Sieders.

“When the car was running properly, it was fast, and really good under brakes, which is what you need for Barbagallo.

“We’ve had some really disappointing rounds in Perth, and it took us four years to crack a pole, race and round win [in 2013], and even though we slipped last year, I definitely think we’re going to be back towards the pointy end this weekend”.
The V8 Ute Series will get things underway with two practice sessions on Friday, at 9:00 and 11:40am, before Qualifying at 2:40pm, with two races on Saturday at 10:05am and 4:05pm and the third and final race at 11:25am on Sunday.

All races will be live on Fox Sports.