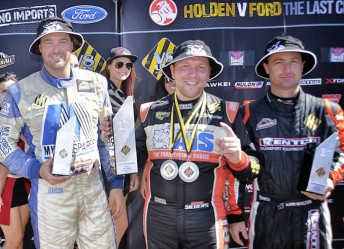 MEDIA RELEASE: After securing his first podium in his switch to Holden, Dave “Sideways” Sieders is determined to continue to show just what his Mango Credit Commodore can do when the East Coast Bullbars Australian V8 Ute Racing Series heads to Hidden Valley Raceway (Darwin, NT) for round three of the 2015 season this weekend, 19th – 21st June.

The 30 year old from Western Sydney has been quite competitive at the Darwin circuit in the V8 Ute Series, and finally took the outright win at the same round last year, and it’s no surprise that Sieders will be looking to repeat that result this time around to keep surging forward in the Championship.

“We had a tough outing in Darwin our first year with engine issues, but since then we’ve been challenging for the round win each time with a number of podiums, even tied on points for first in 2012,” said Sieders, “with a breakthrough round win last year, and a good podium result in Perth at the last round, I do think backing up this year is a real possibility”.

“We had a shocking start to the year, and not how we wanted to debut the Holden, but we bounced back last round and moved from 16th to seventh in the Championship,” said Sieders, “going forward it’s all about cutting down those points to Ryal [Harris] and the Championship lead.”

As the current track lap record holder for the Darwin circuit, and having lowered the benchmark at Barbagallo Raceway in the last round, part of his focus this weekend will be beating his own time set in 2013.

“It’s no secret that, next to race wins, one of our personal goals is to be the quickest on track each session, and cracking that lap record at Perth has just made me that little hungrier to repeat that type of performance this weekend.”

An extended break between rounds two and three, has allowed Sieders to take advantage of some much needed track time to get a better understanding of the car.

“We’ve spent some time throwing a range of different set-up ideas into the car and just seeing how it reacts,” said Sieders, “a lot of the ideas we have had at race tracks, but they could have gone either way so we didn’t want to use them until we had a better idea of how it will affect the drivability. Some worked, some worked in ways that were a little surprising.”

The V8 Ute Series will hit the track for two practice sessions today (8:45am and 1:10pm), with qualifying starting the day on Saturday at 10:30am followed by race one at 3:11pm, with the final two races on Sunday at 11:10am and 4:40pm. All sessions will be broadcast live on FoxSports 5 this weekend.

“Darwin has often been thought of as a ‘Holden track’, so I’m really Looking forward to unleashing some Commodore power down that long straight,”