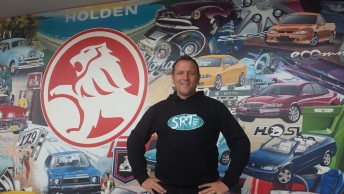 Three-peat runner-up David Sieders will move from a Ford to a Holden this year in search of his first Australian V8 Ute Racing Series win.

The Western Sydneysider will kick off his season campaign at the Clipsal 500, where he holds the record for the most amount of Pole Awards (four) and will be hanging up the blue oval for almost the first time in his racing career.

“With the exception of the Lotus Cup and a couple endurance races in a HQ, I’ve been racing Fords since I started racing, and I guess it’s just time for a bit of a change,” said Sieders.

“I have done quite a few laps to help compare the Holden’s in the past few years, and there’s definitely a few areas where we believe the Holden is stronger than the Ford,” said Sieders.
Hopefully its strengths will complement my driving style enough to finally breakthrough for that elusive title.”

Sieders will have help from teammate and fellow Holden driver Rhys McNally, who raced with Sieders Racing for the first time in 2014, narrowly missing the Series podium.

“Having Rhys and the Holden in the Team was a great learning experience for us last year,” said Sieders, “we now have a good idea of what the cars are capable of and it certainly made the switch even more inviting.”

The change of make will also see a change in racing number for Sieders, as he is set to throwback to his original car number of three, after five seasons of running number eight.

“Number three was the number that my dad used in the Super Truck Series when I started racing and I kind of grew attached to it then,” said Sieders, “I’ve used ‘three’ in karting, Formula Ford, Lotus and hopefully it’ll be a good bit of luck.”

Sieders racing will hold on to the number eight, which rookie Jordan Skinner will don for the remainder of the year. Bruce Oaklands will also join the Sieders camp, the New South Welshman recently purchasing Ben Dunn’s Ford. Jeremy Gray will return to Sieders Racing for the third year in a row and will make up the third Ford in the five car outfit and will be looking for his second Clipsal race win.

“It’s been a while since I’ve had a win, we’ve had a lot of bad luck the past few years and it would be great to stand on the podium again,” said Gray.

All drivers will hit the track for Round 1 at the Clipsal 500 in Adelaide, Thursday, 26th February – Sunday, 2nd March.

In 2015, all V8 Ute practice, qualifying sessions and races will be broadcast live across a combination of the Fox Sports and TEN platforms, with digital coverage through Foxtel Go. International coverage has been extended to include over 40 countries. The series will feature 24 races over 8 rounds, all on the V8 Supercar calendar.