Short circuit season kicks off with a bang at Alexandra Speedway

Short circuit season kicks off with a bang at Alexandra Speedway 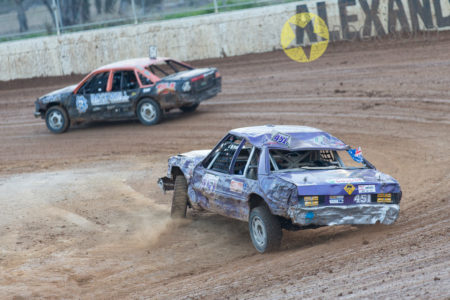 The Speedway Short Circuit season is upon us at Alexandra Speedway and the first of three events on Saturday night provided plenty of entertainment with the Crash and Bash Association in town for the running for the ‘Ramsdale Wreckers Crash for Cash’ and local father and son winners when Alexandra man Luke Fallon and his son Will won their categories.

A large crowd came to watch the Crash and Bash class spin, bump, grind, whack and smack their opponents all around the dog leg circuit in their quest for victory in both a Ladies and Open gender feature.

After qualifying in top spot, Jason McKendry then elected to start at the rear of the field for the feature race in order to make a spectacle for race fans. Service and Kevin Hughes then moved to the front of the field to start. Thirty laps appeared on the lap counter and racing began with Service taking the race lead initially from Hughes and by lap seven ahead of tenth starting Judd.

By lap eleven McKendry was in second spot having passed Brad Warren, Judd, and Craig McKendry along the way. On lap thirteen the top qualifier had claimed the race lead and soared on to a huge victory in front of Warren, Service, Craig McKendry, and Matthew Haby. Along the way McKendry was that good and that hard to catch and hit, that he set a new one lap, six lap and thirty lap record for the class at the venue.

In the Ladies action Sharon Morrison and Kellie Latham twice, won the heat races proceeding a fifteen-lap final. Latham then set lap times a second per lap faster than anybody else on track at times and after losing the lead briefly in the early stages of the race to Kirsten McKendry, Latham retook and built a lead to win by almost seven seconds from Stephy Grace, McKendry, Tayla Hughes and Morrison. With transponders for Ladies Crash and Bash being used for the first time at Alexandra, Latham set a new one lap, six lap and fifteen lap record for the Ladies class.

With a twenty-five plus Sports Sedans entering pits gates to start the day, they also competed in nine qualifying races before their feature race. Circuit racer Darren Forrest returned to the dirt track in preparation for the 100 Lap Derby that is coming up on Queens Birthday weekend and won the first race of the night. He was followed by Damien and Brendan Miller taking wins then Steven Akil, Luke Fallon, Lee Beach, Andrew Jordan, Zac Swanson, and Gareth Wilson making it nine different winners in nine qualifiers. Damien Miller set new one lap and six lap records during the qualifying.

Fallon and Beach started from the front row, Jordan, and Steve Kershaw then Wilson and Brendan Miller. Fallon jumped away best at the green flag to commence the race. Jordan was quickly into second before exiting the race early due to mechanical breakdown. Matthew Brooks who began the race way down in the field in thirteenth was in fifth spot by lap three. At the halfway mark Fallon was leading Kershaw, Beach, Wilson, and Brendan Miller.

Nothing changed from the halfway point in terms of position and Fallon a local Alexandra man, won by less than half a second in front of Healesville businessman Steve Kershaw and then Beach, Wilson, and Miller. Fallon a four-time 100 Lap Derby winner is now prepped and primed for this year’s edition of the race coming up.

In other class action the national Junior Sedan class Top Stars and New Stars competed. Jayden Bryant in Top Star Juniors won the first two of three qualifiers and Dylan Barrow the third before the two drivers secured the top two spots in the final. Bryant was never headed as he went on to win from Barrow, Linken Paterson, Jack Randall and River Paterson in the final event.

New Star action produced a battle all night with Rye Orme, Will Fallon and Maddy Capon in a scrap in each qualifying race and the final. Fallon and then Orme twice were winners in qualifying. In the final Orme led every lap of the race and thought he had won the feature event before Stewards had to inform him of a safety infringement and hand the victory to Will Fallon. Fallon was then awarded the win from Capon, Jack Kershaw, Toby Parks, and Sam Cherry with the margin between Fallon and Capon less than a second.

Leigh Gooding, Tyler Barton, and Greg Parks all won heat races in the Street Stocks with a new one lap record set by Barton and a six-lap record by Parks during the first use of transponders for Street Stocks for short circuit races. Barton then went on to win from Gooding and Kevin Brogmus in the final.

Alexandra Speedway will open up again for the 100 Lap Derby, Victorian Short Circuit Championship for Juniors and Standard Saloon action on June 12 and 13 the Queen’s Birthday weekend.