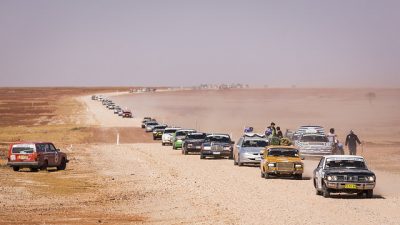 Proudly the charity’s biggest national fundraiser, Shitbox Rally challenges teams of two to drive a car worth less than $1k (aka a ‘shitbox’) across Australia’s dusty outback roads for a week.

When founder James Freeman launched the rally in 2009 he wanted to find a way to fight for cancer victims and sufferers after losing both hismother and father to cancer in quick succession.

With 17 rallies completed to date, it has clearly been a winning formula of hard work, fun and fundraising with participants testing themselves physically, emotionally and spiritually.

“I am absolutely thrilled that our combined fundraising efforts have ticked over $15 million raised, especially to reach this amount before we embark on our 10 year anniversary rally next year. I am hoping with the continued support from our participants we can capitalise on our growth and double this amount in the next 5 years.” said Freeman.

Also contributing to fundraising totals is the rally’s little brother, Mystery Box Rally which is a similar, shorter rally where participants are only told which town they will begin and end in – the rest is a mystery.

Professor Karen Canfell, Director of Research at Cancer Council NSW said “We are incredibly grateful to Box Rallies for raising $15 million for Cancer Council, which helps to fund our life-saving research. We rely on community donations to fund our work; since 2010, Box Rallies has helped fund over 24 cutting-edge cancer research projects across Australia – projects that are giving us hope for a cancer free future”.

Its been a massive 2018 for Box Rallies so far with the Brisbane to Darwin Shitbox Rally breaking all fundraising expectations in May, a ten-year anniversary rally just announced for 2019 from Perth to Sydney and the 2018 Mystery Box Rally due to start in Mildura this October.

Donations can be made at: https://www.shitboxrally.com.au/