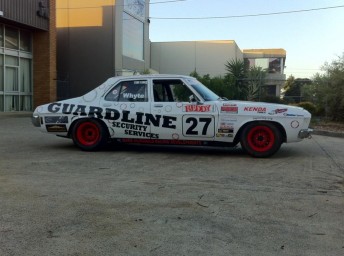 The 2014 4 Hour marks the 22nd running of the endurance race for one of Australia’s longest-standing and most affordable one-make racing series, and is held in memory of Ken Leigh, who built and supplied components for many HQ race cars in the 1990s and 2000s.

Whyte, who will team up with his brother Richard in the Guardline Security Services HQ, believes this year’s field will be as competitive as ever.

“The field for the 4 Hour is always very strong, because it’s the one event everyone wants to win,” Whyte said.

“There are plenty of fast Victorians like Keven Stoopman, Carl McHenry and John Wise, but recently the South Australians have been very successful in the 4 Hour and the likes of Bruce Heinrich, Neil Corey and Gavin Porteous will give us a real run for our money.”

The four hour race is split into two halves of two hours each; one on Saturday and one on Sunday. At the end of Saturday’s half, the timing freezes and cars restart on Sunday from the same position. Each half of the race includes three compulsory pit stops: two for wheel changes and one for a driver change.

Whyte says the optimum strategy is to have a trouble-free run on Saturday, before shooting for glory on Sunday.

“It’s not necessarily that important to be leading at the end of Saturday, but you want to be on the lead lap,” Whyte said.

“On Saturday night, you have the opportunity to refresh the car which is important, because Sunday is another long, tough day where you’re surrounded by competitive cars.

“The pit stops are very important, especially the wheel changes, and there is a lot of time that can be gained by having an efficient, well-organised pit crew.

“This is the longest race of the year for the HQs and we prepare for it very seriously. The weather conditions are always very warm at this time of the year which can test the mechanical longevity of the cars, so this year we started our preparation a month out and we did a test day at Winton to make sure we ironed out any problems.”

Whyte, who has raced HQ Holdens for almost 15 years, is proud to call Winton his home track.

“Winton is a track I’ve always enjoyed and I’ve always been competitive there, I had a couple of race wins at the sprint round earlier this year,” Whyte said.

The Whyte brothers will be challenged by some other strong pairings including the South Australian combinations of Bruce Heinrich/Neil Corey and Wayne King/Gavin Porteous.

Other contenders are likely to include Keven Stoopman/Brett Osborn, John Wise, who is joined by 1987 Bathurst 1000 winner David “Skippy Parsons, and this year’s NSW HQ Champion John Baxter, who teams up with Matt Barker.