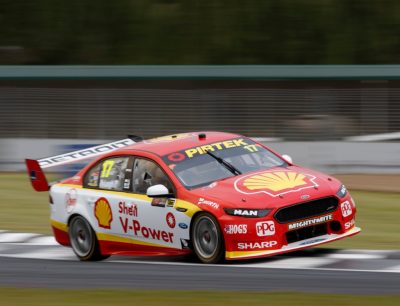 Shell V-Power Racing Team and Sharp Corporation of Australia have announced an extension of their partnership for the 2018 Virgin Australia Supercars Championship.

Sharp Corporation is one of Japan’s oldest and most trusted manufacturers of consumer and business electronics, beginning in 1912 as a small metal-working concern in Tokyo.

Since joining the team as a partner in 2016, Sharp have assisted the team in streamlining several office processes, whilst using the partnership for internal and external promotion and marketing of their business and products.

Daniel Gard National Marketing Manager for Sharp Australia said that the partnership was about bringing together the technological synergies between Sharp and Shell V-Power Racing Team.

“We’ve enjoyed the partnership between our companies immensely over the last two years, with 2017 and the performance from the team an absolute highlight,” said Mr. Gard.

“We’ve been able to develop business-to-business relationships with several of the team’s other partners and suppliers, as well as benefitting from the lessons that can be learned from the cutting edge, high pressure environment of the Virgin Australia Supercars Championship. We look forward to more success on and off-track in 2018.”

Shell V-Power Racing Team, Team Principal Ryan Story said the team was delighted to have Sharp re-commit to the team in 2018.

“Sharp have been a partner that have assisted us in several aspects, including the provision of technology that has assisted our productivity on and off the track. Having their support for the 2018 season is very pleasing, and we look forward to repaying that support with continued success,” Dr. Story said.