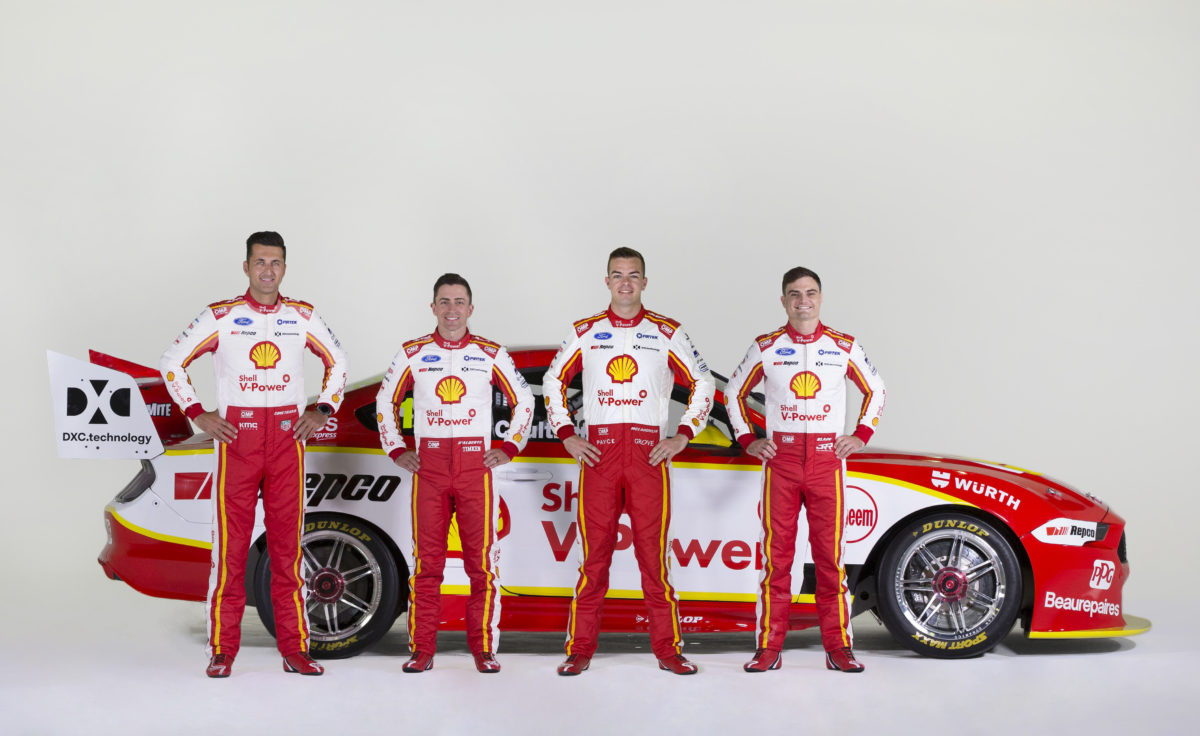 The Shell V-Power Racing Team launched its 2020 season in Adelaide today, in front of the number one garage in pit lane.

The team displayed its 2020 Shell V-Power Ford Mustang GT Supercars in front of their new home as reigning Teams’ and Drivers’ Champions.

Scott McLaughlin and Fabian Coulthard were in attendance, along with Pirtek Enduro Cup co-drivers Tony D’Alberto and Tim Slade.

The Shell V-Power Racing Team entries will continue to carry the eye-catching and recognisable red, white and yellow of major partner Shell V-Power, with some detail changes to the livery including larger Ford ‘blue oval’ logos and the addition of Beaurepaires to the front splitters.

Shell V-Power is joined in their support of the team by Repco, Ford, Pirtek, Beaurepaires, DXC Technology, PPG, Three Threes, Rheem, Wurth and Coles Express for the 2020 season.

In what is the 40th year of the team, starting as Dick Johnson Racing in 1980, team co-owners Dick Johnson and Ryan Story reminisced about the history and success of the team across the eras.

“It’s hard to believe that I put together a little team back in 1980 that has now become one of the most successful in the history of the sport,” said Johnson.

“Across that time there have been many different cars, many different rule books and many periods of success and hardship, but the one constant has always been the support of Shell.

“It’s now 53 years since a Shell pecten first appeared on one of my race cars, and their unwavering support of me and our team has taken us to the peak of the sport. Long may it continue.”

Story said that the success of last season was something the team was incredibly proud of but would not cause the team to rest on its laurels.

“We had an incredible 2019, unprecedented in many ways. However, 2020 is a brand-new season, and last year is history. We have many challenges ahead of us and we don’t doubt for a second that it will be a demanding year,” said Story.

“We have several variables to account for, including new aero and suspension packages for the 2020 season. We will of course aim to win as many races as possible, but we know our rivals have redoubled their efforts in the off-season and expect a great battle. It will be a sensational season of on-track action. Of that, I have no doubt.”

Back-to-back reigning Virgin Australia Supercars Champion McLaughlin said he is looking forward to the start of the new season this weekend.

“It feels like ages since I last drove my Mustang, and I can’t wait to get back behind the wheel” said McLaughlin.

“I had a fantastic off-season, I got married, drove an INDYCAR and had a great rest. I’m ready and raring to go racing in 2020.”

Coulthard, No.12 Shell V-Power Ford Mustang pilot, said that he expects the 2020 season to be a battle for the ages.

“This season is shaping up to be a fantastic battle on the track across a bunch of different teams. I’ve had a sensational summer, training hard and working towards a big 2020. I’m looking forward to getting some more trophies this year.”

The Shell V-Power Racing Team Ford Mustangs will hit the track at the Superloop Adelaide 500 beginning on Thursday.