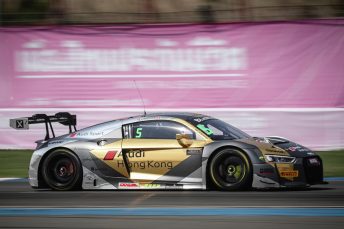 The Audi Hong Kong team of Shaun Thong and Marchy Lee were full of confidence coming into the second event of 2017 Blancpain GT Series Asia, the Audi pair had claimed their maiden GT Asia Series race win in 2016 at Buriram’s Chang International Circuit, and they were third in the standings coming into the Thai event after a strong start to the season in Malaysia.

Practice saw mixed results, but ahead of qualifying the Phoenix Racing Asia team had them within reach of the leaders, although qualifying saw them both just ninth fastest in their respective groups. That didn’t deter them though with the brilliant silver and gold #5 Audi charging to second in both 60-minute races to elevate them to second in the championship race a third of the way into the season, just two points off the title lead!

Marchy Lee started the opening race, avoiding some early carnage at the front of the field to move forward with some dramatic overtaking moves to hand Thong the car during the compulsory mid-race pit stop in third position. Thong rejoined in fifth and quickly worked his way back into the top three, the 21-year old amongst the fastest drivers on the circuit to cross the line within sight of the leaders.

Ultimately he and Lee crossed the line in third place, but post-race investigations saw the second placed machine handed a 30-second penalty, giving the Audi Hong Kong team second overall and a share of the championship points lead.

“Marchy did a great job off the start making some incredible overtaking moves, before working his way up to third,” Thong said. “Then it was up to me to make the most of that opportunity despite the late surge from my Audi Cup rivals Alex [Yoong] and Alessio [Picariello].”

Whilst Lee’s moves early were impressive, Thong’s pace was outstanding, the 21-year old amongst the fastest drivers on track, and consistently amongst the fastest Audi drivers as he weathered the ongoing storm from Phoenix Racing Asia team-mate – three-time Audi R8 LMS Cup champion Alex Yoong.

Thong’s pace was again impressive during the second event of the weekend, working his way up to the top four ahead of the compulsory pit stop, his lap times even more impressive when you consider he was running on the same tyres on which he finished the opening race, his best lap – 1:35.348, mere hundredths slower than team-mate Marchy Lee’s best of 1:35.256 on new tyres..

The Thailand result now classifies the #5 Audi Hong Kong team second in points, just two points down on Englishman Hunter Abbot after four of 12 events with Suzuka in Japan the next event on the calendar in five week’s time.

“It’s a great result, but importantly we grabbed valuable championship points and at the same time, we were the leading Audi in both races here in Thailand,” Thong said.

“I am delighted to wrap up the weekend with two second placed finishes, but for me I feel I performed very well and drove two very good stints against some tough opposition – Alex Yoong in race one, and Alessio Picariello in race two – in both cases neither of them were able to make it past.

“It was also nice to be amongst the fastest drivers on the circuit in race two despite being on old tyres, when many around me were on new rubber.

“I have to say a big thanks to Audi Hong Kong and the Phoenix Racing Asia team who gave me a competitive and trouble free car in which we are able to challenge again for the title this year. We have a long way to go, but it has been a great start to the season!”

The third event of Blancpain GT Series Asia will be at the iconic Japanese Suzuka circuit on 24-25 June, with Thong and Lee’s next commitment also coming at Suzuka, on 10-11 June for the second event of the 2017 Audi R8 LMS Cup.