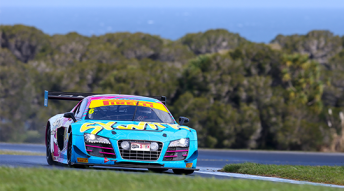 The weather made a nice turn for the Australian GT Trophy Series at Phillip Island, with Rod Salmon topping their single practice session for the day.

Salmon changed from wet weather to slick tyres late in the session, setting the fastest lap with a 1:37.3374.

The series returns tomorrow for their final practice and two qualifying sessions.

A wet day on-track saw competitors in Porsche GT3 Cup Challenge Australia endure some tough conditions, in what was a busy day for the final round of the series.

Love is looking the goods to wrap up the outright title tomorrow, having to only finish eighth in the opening race to seal the title.

John Karytinos will share the front row with Love, qualifying ahead of fellow Elite drivers Sam Shahin and Anthony Gilbertson.

John Morriss is set to start fifth, alongside John Steffensen who returns to the grid this weekend.

The series will wrap up their 2017 season tomorrow, with three races to decide who will take out the outright, Professional, Elite and Class B titles.

The final practice session of the day saw Jack Smith set the fastest lap, as part of the penultimate round of the Kumho Tyre V8 Touring Car Series.

Jordan Boys was third quickest in his Falcon, ahead of Kumho Cup runner Jon McCorkindale.

Smerdon was fastest in Practice 2, in what were extremely wet conditions at the Island.

Touring car competitors will now prepare for qualifying tomorrow, ahead of their first 11-lap race for the weekend.

Grant Sherrin has claimed the fastest time of the day in the Australian Production Car Series, setting a 1:45.7378 in the opening practice session.

Sherrin was 1.5 seconds faster than Jeremy Gray in second, who returns to the series this weekend with George Miedecke.

Running in two different cars this weekend, Rod Salmon sped his way to third on the sheets, ahead of Dimitri Agathos and Indiran Padayachee, rounding out the top A1 cars.

Hadrian Morrall was fastest in class C, while Michael Gray was first in the D class. B1 saw Steven Champion lead the way, with Paul Currie on top in E class.

The series will return to the Island tomorrow morning for two more practice sessions ahead of their two qualifying stints.

Hughes, who unfortunately missed the previous round at Queensland Raceway due to mechanical issues, set the quickest time of the day in the series with a 1:34.2874.

Tomorrow’s schedule sees the series run qualifying and the opening race, in what will be the final round of the Australian Prototype Series.