Series originals back behind the F5000 wheel

Series originals back behind the F5000 wheel 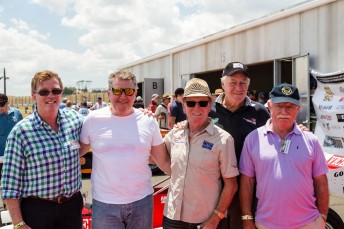 As part of the celebration of the Formula 5000 category at the fourth round of the 2014/15 MSC NZ F5000 series at the second Gulf Oil Howden Ganley F5000 Festival meeting at Hampton Downs over the Auckland Anniversary weekend, a number of category and Tasman Series originals got back behind the wheel.

Also out in the demo session on Saturday was Nick Gethin, the son of the late Peter Gethin, a driving contempory and teammate of Brown and Pilette.

He was reunited with the Lola T430, model number HU2, he used to win the Australian Grand Prix at Sydney’s Oran Park circuit in 1977. The car is one of two T430 models owned by MSC F5000 Tasman Cup Revival Series regular David Abbott from Christchurch.

The other driver to be reunited with one of their original cars was 1970 Tasman Cup champion Graeme Lawrence who did his laps in the T332 Lola now owned and raced by Russell Greer.

Lawrence used the car to finish second behind Warwick Brown in the 1975 Tasman Series.

The other Australian category original, Queenslander Bruce Allison, also drove a Lola T332 in period and got to drive compatriot Paul Zazryn’s T332 on Saturday.

The other Kiwi, Dexter Dunlop, drove a McRae GM1, as he did in period, while Nick Gethin drove the Chevron B24/28, now owned and driven by compatriot Greg Thornton, which Peter Gethin used to claim his historic victory against a combined field of Formula 5000 and Formula 1 cars at Great Britain’s Brand Hatch circuit in 1973.