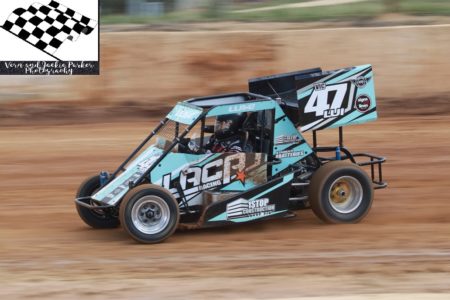 Wangaratta City Raceway, the best dirt track in Victoria’s North East began its race season with a sensational crowd on hand to witness a Victorian championship in the Grand Prix Midget class and some crazy, yet fun action in some sedan classes that resulted in a number of cars losing wheels in race accidents.

With Covid having halted dirt track racing for a long time, the sports fans were very keen to see some racing and the the Grand Prix Midgets, the Compact Speedcars, Sports Sedans, Unlimited Sedans, Standard Saloons and Junior Sedans certainly provided plenty of that.

Brendan Eames from Corowa proved to be too good for his Standard Saloon competitors when he led from start to finish in their final. Starting the final, the chief steward, for jumping the start, dispatched a none to pleased top qualifier Wayne Sheerman to the rear of the field. Sheerman battled hard through a strong line-up as the race began. Michael Poole also from Corowa finished second to Eames with Sheerman storming back to third spot in front of Trevor Evans and Shane Roycroft.

The Sports Sedan’s had some huge accidents in the lead up to their feature event. Some serious contenders for the top five finishers copped damage, Rhys Collins, Jaiden McCann, Josh Beattie and Felicity Roycroft. Collins car did not make the feature due the severity of his damage.

Local Wangaratta racer Ray Ussher led from start of the race to the finish to win the Sports Sedans. Tristan McGraw followed him across the line in second with Robert Garlick in third ahead of Andrew Jordan and Marcus Griffiths.

A new and first time Victorian Grand Prix Midget champion was crowned when Kyabram driver Luis Rodriguez lead all the way to win the big event. The final started with heartbreak when New South Wales superstar Janelle Saville could not get off the start line as her accelerator cable snapped. Gary Bowyer from Sydney gave Rodriguez a workover through the title race as he continuously tried to put a move on the leader. Rodriguez went on to win from Bowyer, Alex Myers from Shepparton, Terry Brown and Mark Blackeby.

Rodriguez for a long way, led the other open wheel class final of the evening the Compact Speedcars. However, Michael Conway chased him down and with a few laps to go took the lead and ultimately the victory with Rodriguez finishing second. Justin Paull, Daniel James and Tania Hallett rounded out the top five.

In Junior Sedan action Bradin Claridge from Bendigo was the big winner whilst serious contender Dylan Barrow was unable to start the final due to clutch damage. Claridge led every lap of the final with Marty Bassett second, Abbi Garlick, Michael Sayers and Riley Balins the top five at the line.

For the first time, the Unlimited Sedans competed at Wangaratta and proved to be popular with the fans. The current Victorian Champion Warrick Taylor all three qualifying heat races before winning the final. Taylor defeated Trent Susol, Lennie Bonicci, Stan Brown and Daniel Unternahrer.

Wangaratta City Raceway is now in full swing, with event two coming up on February the 20th.