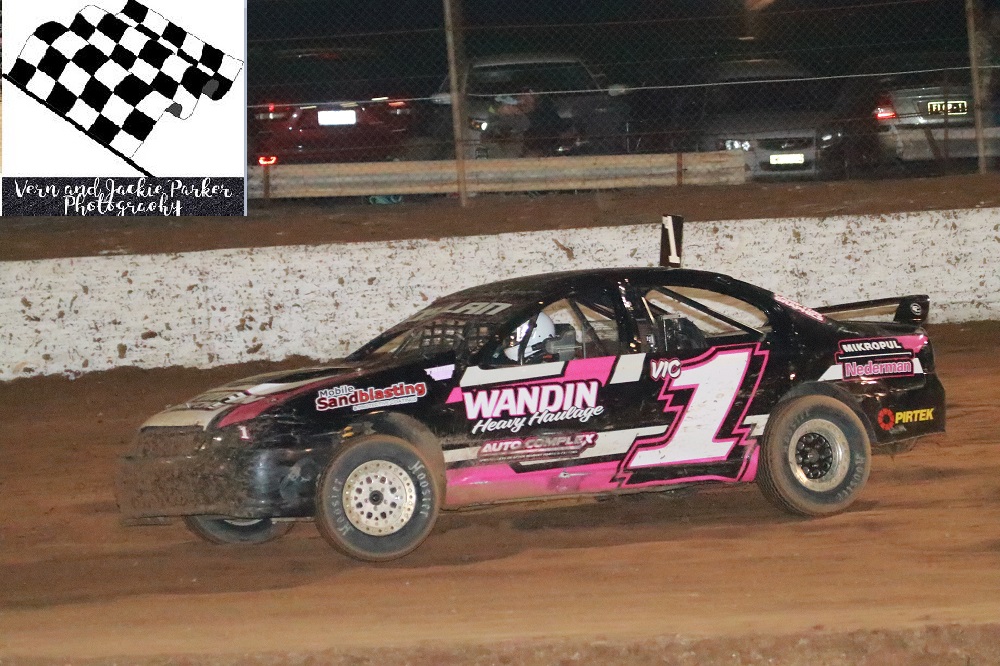 On the latest night of racing at Rushworth Speedway where the meeting featured the ‘Bendigo Total Tools’ Junior Spectacular features drivers in every line-up produced some great racing for the fans to enjoy with Arthur Hutchinson winning the Junior 1200cc Sedans and Dylan Barrows the Junior Open Sedans whilst other winners included Keith Simmonds, Jack Houlahan, Kelly Lamb, Anthony McKean, Matty Chiminello and Matt Leek.

With support from a number of major businesses in Bendigo, every Junior was awarded with a prize of some sort on race night along with the top five drivers in each line-up receiving sashes and trophies.

The Junior 1200cc Sedans had attracted cars from West of Melbourne, South Gippsland, South East of Melbourne, Bendigo, Swan Hill, Wangaratta, and the Murrindindi areas. Hutchinson who has been a driver dominating the 1200cc class continued on his winning ways when he was able to lead to the finish line Riley Taylor, Bryce Leek, Braiden Webster, and Connor Claridge.

Junior Open Sedan action was also terrific and for much of the racing Dylan Barrow the Victorian champion and Bendigo racer Connor Claridge were within an arm’s length of each other. Claridge was unable to finish the feature race due to mechanical issues and Barrow went on to win from Anthony Hanson of Bendigo, Marcus Maclean of Corowa, Keiden Britton another from Bendigo and Jordy Tewkesbury.

Visiting competitors in the Standard Saloons and Unlimited Sedans competed on track at the same time in separate races. Despite the best efforts of instructions of the Steward, they managed to tangle up in the big feature race where Matt Leek and Tim Hutchinson were having their own terrific side by side Standard Saloon battle. The result was damage to Hutchinson’s car and Leek winning the Standard Saloons from Patrick Walsh and Andrew Marshall from Bendigo. In the Unlimited Sedans Anthony McKean put in some terrific passing and he went on to win from Ian Page and Tim Williams.

Sports Sedans visited once again and Matt Chiminello whom had not raced for some time returned to the track and after a big engine bay detonation to the car of Dillon Taylor who had hit the front of the field, Chiminello took control completely and won from Marc Hanson of Bendigo, Gary Gapes, Shaqkira Blake, and Chelsea Hodge.

Kelly Lamb won the Goulburn Valley Ladies Saloon class from New South Wales visiting driver Lisa Chalcraft and Nicole Gapes. Whilst Keith Simmonds was able to win ahead of Mark Bergman whom he had been helping during the week with race car maintenance. Daniel Smith was third Scott Smith in fourth and Matt Smith in fifth spot in the Goulburn Valley Open Saloons.

Jack Houlahan was terrific in the Goulburn Valley Production Sedans, and he proved to be too good for Andrew Ahearn in the final. Shane Hutchins finished third with Geoff Lee and Jason Ahearn rounding out the top five.

Goulburn Valley Auto Club host the next event at Rushworth Speedway on May the 14th which will be Memorial night.