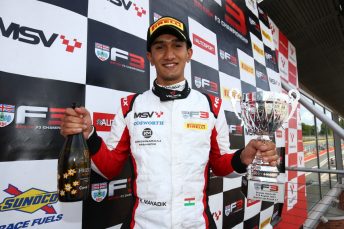 The 19-year-old, from Kolhapur, made his British F3 bow last year but thus far in 2017 has been on the racing sidelines. After signing a late deal with Double R to make his first appearance of the year over the weekend at the team’s ‘home’ track, Mahadik starred with an impressive performance.

Starting race two from pole position, having finished eighth in the opening contest, Mahadik led the encounter well during the first half of the 14-lap race but ultimately had to settle for second place at the chequered flag behind Toby Sowery. Post-race, though, Sowery was excluded after scrutineering as a result of his car’s eligibility and so Mahadik inherited a remarkable win.

“It was amazing”, said a delighted Mahadik, “It was hard to defend against Toby [Sowery] but I’m very happy with the result. Second place was a great result on my first weekend with the team, but I’m obviously very happy to have taken my first win in British F3.”

Jamie Chadwick secured a best result of fifth in the same race, round 17, and departed Brands Hatch ninth in the championship while Brazilian team-mate Guilherme Samaia had a weekend to forget with non-finishes in the first and second contests. In race three, he posted a top 12 finish.

Reflecting on the weekend, Double R team principal Anthony ‘Boyo’ Hieatt said: “What an amazing result for Krish, he’s come into a new team having been out of an F3 car for the best part of a year and delivered a win – you can’t ask for much more than that. It’s a fantastic result and very well deserved, he did a great job all weekend.

“Jamie was competitive and quick again, as we’ve come to expect, and fifth in race two was a strong finish. Her fastest lap was only a tenth off podium pace, so we’re pleased with that. Unfortunately for Guilherme he had a bit of a nightmare with two non-finishes, but I’m sure he’ll hit back strongly during the next round at Snetterton.”

Race one on Saturday began with Samaia the highest placed Double R driver in 12th position, with team newcomer Mahadik 14th on the grid just ahead of Chadwick in 15th place. Unfortunately for Samaia he slipped to the tail of the field after a troublesome start but Mahadik managed to climb into the top 10 with Chadwick moving into 14th at the expense of her Brazilian team-mate.

Samaia quickly started to close down the pack ahead as he tried to recover the lost ground, but on lap three an excursion resulted in a luckless retirement. In the meantime, Mahadik and Chadwick circulated in unchanged positions as the race settled down. Halfway through the contest, though, proceedings took a dramatic turn with the arrival of rain over Brands Hatch.

Creating very challenging slippery conditions for the drivers, with all of them obviously running on slick tyres, as the rain worsened several cars came to grief at Paddock Hill Bend which resulted in the deployment of the Safety Car on lap eight. Mahadik moved up into the top eight and Chadwick into 11th as a result, before the race was stopped soon after with conditions failing to improve.

Eighth place gave Mahadik pole position for round 17 on the partially reversed race two grid, with Chadwick lining-up at the head of row six and Samaia starting at the back in 16th place due to his earlier non-finish. Making a textbook launch from the head of the grid, Mahadik got away from the line smartly and with several cars behind tangling at Druids he was able to open a gap at the front.

Into lap two, though, he was just 0.3 seconds ahead but he started to again pull away with fastest lap pace early on. By the start of lap four, Mahadik was two seconds to the good and looking comfortable but when Sowery got through into second position the lead started to diminish.

Staying ahead until lap eight, Mahadik soaked up the pressure superbly but ultimately succumbed to a challenge from Sowery into Druids. Following a two lap Safety Car period on laps nine and 10, the Double R debutant consolidated his second place to chalk-up a fantastic podium result. With Sowery’s post-race exclusion, though, the Indian celebrated a famous maiden British F3 victory.

Chadwick enjoyed a very competitive race and from 11th on the grid she was able to leapfrog into the top eight on lap one at Druids, safely negotiating the multi-car tangle. Pressuring the two cars immediately ahead, the former British GT4 champion looked every which way to try and pass Omar Ismail as the race reached mid-distance but a clear-cut opportunity didn’t present itself.

Following an excursion into the gravel at Druids for Ben Hingeley on lap eight, which triggered the Safety Car, Chadwick assumed seventh where she remained to the flag on lap 14, just 0.5 seconds shy of the top six. As a result of two exclusions, though, she was elevated into fifth post-race.

Brazilian driver Samaia also displayed good pace but his involvement in the contest came to an early conclusion on lap eight after being nudged off the circuit at Stirlings. Putting together an outstanding first lap to gain no fewer than six positions, leaping into the top 10, Samaia then moved into ninth on lap two and joined the train of cars featuring Chadwick but his race was run just after mid-distance.

For the final race of the weekend, round 18, Mahadik lined-up in ninth position, Samaia in 10th and Chadwick in 11th place. Climbing into seventh on lap one, Mahadik remained there until three laps from the conclusion when Sowery got ahead and edged the Double R racer back to eighth.

Chadwick managed to move into the top 10 initially, as Samaia went in the opposite direction and dropped to 13th position, but the Brazilian recovered back into the top 12 when Chadwick slipped back on lap four. She eventually finished in 15th place.

There are now three weeks to wait until the penultimate race meeting of the 2017 BRDC British F3 season, a return visit to Snetterton 300 Circuit in Norfolk over the weekend 26th/27th August.

First, though, Double R will be back on track next weekend, 12th/13th August, at Knockhill in Scotland for the latest instalment of British Formula 4 – the team’s third back-to-back weekend of race action.