Million-dollar WRC Subaru up for grabs 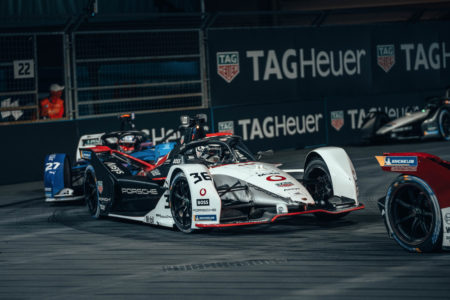 At the second London E-Prix race on the spectacular ExCeL Track at the Thames, the TAG Heuer Porsche Formula E Team secured another top-five result. Pascal Wehrlein (GER) achieved fifth place on Sunday at the wheel of his Porsche 99X Electric, after his teammate André Lotterer (GER) placed fourth the day before. The race on the city circuit in East London’s Docklands was the last before the final round of the ABB FIA Formula E World Championship in Berlin, where two races will be contested on 14 and 15 August.

Race 13
After narrowly missing out on the Super Pole qualifying, Pascal Wehrlein began the race from the seventh grid spot in his Porsche 99X Electric. On the 2.25-kilometre circuit, part of which runs through an exhibition hall, he drove a solid race in the 24-strong field of electric cars and gained one position. Due to a competitor’s disqualification, he ultimately secured fifth place. His teammate André Lotterer tackled race 13 from P16 and launched a spirited chase through the field to ninth place, only to be handed a drive-through penalty during the second half of the race when he and an opponent made contact before Turn 1. As a result, he was relegated down the field and finished 17th.

Comments on the London E-Prix, Race 13

Amiel Lindesay, Head of Operations Formula E: “That was an exciting race, typical for such a narrow and twisty racetrack. It wasn’t easy today, so with that in mind, Pascal did a very good job. We can be satisfied with the second top-five result on our race debut in London. André started from one of the back rows, drove a remarkable comeback race and almost finished in the points. The drive-through penalty unfortunately prevented him from profiting from his strong performance. All in all, we’re taking a lot of positives with us from London to the season finale in Berlin. The world championship is still open. At our home race, we want to bring the season to a successful conclusion.”

Pascal Wehrlein, Porsche works driver (#99): “That was an improvement today, which was also due to the qualifying. I almost made it into the Super Pole. In terms of the race, you walk a fine line on this track as you saw by the multiple collisions. Overtaking is tricky and there’s a very high risk of damaging your car. It was important for me to make it through well and earn as many points as possible. We’re still in the fight for the title. Now we’re all looking forward to Berlin.”

André Lotterer, Porsche works driver (#36): “I’m not happy with my qualifying but my car ran like a dream in the race and I managed to gain a few positions. However, the drive-through penalty put an abrupt halt to my charge up the order. Fourth yesterday, 17th today – that’s always possible in Formula E. All in all, London was a good weekend for us and that makes me confident for the final races in Berlin.”

Next up
The next event for the TAG Heuer Porsche Formula E Team is the Berlin E-Prix on 14/15 August with the season finale (races 14 and 15) of the ABB FIA Formula E World Championship.