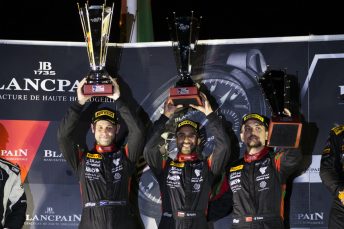 Partnered for the longest encounter of the season so far by regular team-mate Jonny Adam and Oman Racing newcomer Salih Yoluc, Al Harthy and Adam now lead the Pro-Am championship by eight points with two races to run in the 2017 campaign.

Notably, when added to his two Michelin Le Mans Cup wins at Le Mans a week ago, Al Harthy has claimed silverware in every race he has contested in any championship this year – a magnificent record and a clear indicator of the Omani’s increasing stature in global endurance racing.

Adam qualified the No.97 Aston Martin V12 Vantage GT3 fourth fastest in Pro-Am for the annual ‘into the night’ race at Paul Ricard with Al Harthy taking the opening stint, followed by Yoluc, before the Omani climbed back aboard for his second stint.

Moving into the lead of Pro-Am, following a penalty for a rival Mercedes-AMG entry, Al Harthy then handed the car back to Yoluc before Adam delivered a typically professional and committed double stint at the conclusion to wrap-up another fantastic result for the Oman Ministry of Sports Affairs, Oman Air, National Bank of Oman, Omantel, Barr Al Jissah and Amouage-backed squad.

“Finishing second is an amazing result for us, it’s the best we could do”, said a delighted Al Harthy, “It was a really tough race but all of the guys did an incredible job, the car was superb and there wasn’t a single issue. I have to say a huge thank you to the whole team, the pit-stops were amazing, honestly so good, and that’s what helped us take such a good result.

“We said at the start of the weekend it was all about taking away as many points as we could from Paul Ricard, we’re so happy with this result. It’s been an amazing 10 days for Oman Racing in France, the wins at Le Mans and now another podium in Blancpain. It’s so important to be going to Spa [round four next month] with our confidence so high.”

Adam produced a best lap of 1m57.314 seconds in the final qualifying run on Saturday morning to secure fourth fastest in Pro-Am and Al Harthy went on to take the opening stint of the big race, importantly threading his way through the notoriously busy first few corners safely.

Climbing into third in Pro-Am on the first lap, following a Full Course Yellow cautionary period and subsequent Safety Car the Omani still held his podium position when racing got back up to full speed with just under half an hour elapsed.

Another Full Course Yellow was required around 10 minutes later, which again developed into a full Safety Car period, and during this time Al Harthy pitted to make the team’s first driver change stop, handing the Aston Martin over to Yoluc.

Initially running in third, the Turkish racer moved up into second in Pro-Am as the end of the first hour approached and then slipped to third again behind the No.87 Mercedes-AMG. Another incident then resulted in the third Full Course Yellow and Safety Car period, with just under 90 minutes gone.

At the second pit-stop, Al Harthy climbed back aboard the Aston Martin and the Oman Racing entry moved into the lead of Pro-Am due to a penalty for the No.87 Mercedes. As light started to fade over Le Castellet, Al Harthy continued to circulate in first place and didn’t put a wheel wrong.

Approaching the end of the third hour, Al Harthy pitted from the Pro-Am lead to hand the car back to Yoluc and he remained at the front of the class until an incident when being lapped by the No.76 Audi, for which the Audi entry was handed a penalty, led to a spin for Yoluc after slight contact.

Dropping to fourth as a result, he slipped down to sixth in Pro-Am before pitting to give Adam his first mileage of the race deep into hour four. Running in the top five initially, the Scotsman made his way back up the Pro-Am order and with one and three-quarter hours to run he held second place.

As the final hour approached, the leading Pro-Am car pitted and Adam duly moved through into top spot before pitting soon after for fuel and tyres. Taking the No.97 Aston Martin to the finish, Adam remained onboard and rejoined the contest in second position where he stayed to the flag.

There is now a five week break in race action for the Blancpain Endurance Cup with round four of the season, the twice-round-the-clock Total 24 Hours of Spa, taking place on 29th/30th July. Before then, there will be an official pre-event test day at the Belgian track on Tuesday, 4th July.