Second place for Mercedes-AMG GT3 at the Nürburgring-Nordschleife

Second place for Mercedes-AMG GT3 at the Nürburgring-Nordschleife 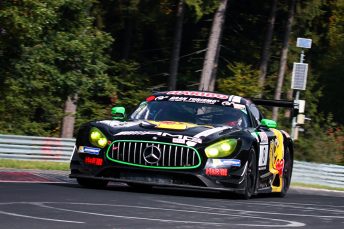 Nürburgring – The weekend at the Nürburgring went off to a perfect start with pole position: Lance David Arnold (GER) was fastest in qualifying on Saturday morning with a time of 7m57.442s. Just before the end of the qualifying session, the HARIBO Racing Team-AMG put everything on a final flying lap for the Mercedes-AMG GT3 with starting number 8, and this strategy paid off: in perfect outside conditions, Arnold found an almost clean track in front of him.

After that, Lance David Arnold also made a good start, defended his pole position and led the field during the first laps. After a shorter first stint of five laps, the Mercedes-AMG GT3 #8 headed into the pits and then staged a fascinating duel for the lead. During the second pit stop, Arnold handed the Mercedes-AMG GT3 to his team-mate Mario Farnbacher (GER). In the process, the team lost the lead due to a longer minimum pit stop time and then encountered some bad luck in the race. After some code 60 phases and many cars that had to be lapped, the gap to the leader increased to over one minute. Final driver Daniel Juncadella (ESP) also turned out to be unable to close the gap. Approximately 30 minutes before the end, the seventh VLN round had to be stopped early following a bigger accident at ‘Fuchsröhre’. Thus, the HARIBO Racing Team Mercedes-AMG was classified in second place after 21 laps. This was the second podium finish for the team that already came second in the second VLN round early April.

Another top 10 result and a successful test

The Mercedes-AMG Customer Racing Team Landgraf Motorsport completed the good achievement at the 24.358 kilometres long combination of the Nürburgring sprint circuit and the Nordschleife with another top 10 result: the trio of Kenneth Heyer, Kai Riemer and Stefan Schmickler (all GER) drove the Mercedes-AMG GT3 #44 to seventh place overall, having started from tenth place on the grid.

Two Mercedes-AMG GT4 successfully completed their further test programme at the Nordschleife, having already participated in VLN rounds 5 and 6. In dry, but difficult conditions due to the many accidents, the Mercedes-AMG Testteam Uwe Alzen Automotive concluded the race with drivers Fabian Hamprecht, Thomas Jäger and Mike Stursberg (all GER) in 19th place overall and second place in the SPX class. Carlos Gomez (USA), ‚TAKIS’ and Jan Seyffarth (GER) finished fourth in class for the Mercedes-AMG Testteam BLACK FALCON (35th place overall).

Lance David Arnold, HARIBO Racing Team Mercedes-AMG #8: “The best Eifel weather, the track almost fully clear in qualifying, that really was fun and of course, it is great that pole position came out a result. My start into the race was really good and we had a good pace. In my second stint, I had to lap many cars during which we lost some time. But of course, we happily take in second place.”

Daniel Juncadella, HARIBO Racing Team Mercedes-AMG #8: “Unfortunately, I didn’t get to drive many laps at the Nordschleife, just like my previous participations here. Hopefully, I will be allowed to drive a little bit longer next time. But it is my first podium finish with the Mercedes-AMG GT3, that is great and really makes me happy.”

Thomas Jäger, Mercedes-AMG Testteam Uwe Alzen Automotive #54: “This weekend, we had super testing conditions in great weather at the Nürburgring. Both Mercedes-AMG GT4 were able to complete their laps without technical problems and we were able to acquire a lot of additional experience. We will analyse this and prepare for our next test in the VLN round.”

* excerpt subject to confirmation by the organiser