Second place and class wins for Mercedes-AMG Motorsport at Silverstone

Second place and class wins for Mercedes-AMG Motorsport at Silverstone 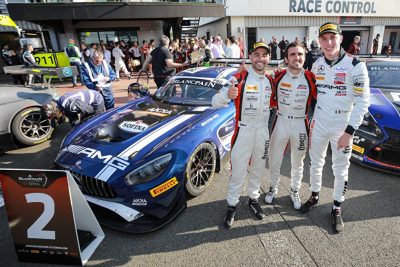 Silverstone – Sunshine and temperatures around 20 degrees centigrade made for optimal conditions for the second round of the season in the Blancpain GT Series Endurance Cup. Twelve Mercedes-AMG GT3 in the field of 50 entrants took on Sunday afternoon’s three-hour race at Silverstone Circuit.

In qualifying on Sunday morning, the #88 Mercedes-AMG Team AKKA ASP entry had already laid the foundation for a successful weekend: top times of all three drivers resulted into second place on the grid. Adam Christodoulou made use of the good grid position and defended second place in the opening stages of the race. After the driver change, Tristan Vautier built on the good performance by his teammate and thanks to a clever pit stop strategy he was even able to move ahead of the car that previously was in front of him. After an exciting battle for position, he had to let his opponent go again and handed the car to final driver Raffaele Marciello while in second place. The Italian again showed a very good pace with the #88 Mercedes-AMG GT3 and after a consistent stint and a total of 89 laps, he crossed the finish line in second place. After second and third place in the Endurance Cup season opener at Monza as well as second place in the Sprint Cup at Zolder, Mercedes-AMG thus scored the third consecutive podium success in the Blancpain GT Series.

The next Blancpain GT Series event, also round three of the Endurance Cup, is at Paul Ricard (1-2 June). The next Sprint Cup races will take place at Misano, 22-24 June.

Adam Christodoulou, Mercedes-AMG Team AKKA ASP #88: “It was a tough race, we had to attack all race long. For me, it was the first race with Tristan and Raffaele, it really was fun.”

Tristan Vautier, Mercedes-AMG Team AKKA ASP #88: “During my stints, I had difficulties finding the rhythm which was also caused by the dense traffic. It was a solid race in which we had hoped to be even more involved in the battle for victory, of course. All in all, however, we can be very happy with the result.”

Maro Engel, Mercedes-AMG Team BLACK FALCON #4: “It was a tough, very close race. Today, we certainly could have done better, but it could have ended in an entirely different way, too. At the end of the day, the points that we have scored, matter. Now, we are looking forward to the next race at Paul Ricard.”

Maximilian Buhk, STRAKKA Racing #43: “I took over the car in ninth place, the gap to the front was quite big. Until the pit stop, I was able to move up to seventh place. Today, we had some problems while lapping other cars. We still have some homework to do, in particular concerning the races and the set-up.”

Maximilian Götz, STRAKKA Racing #43: “The first half hour of my stint was hard, I wasn’t really able to attack. Then, however, we got faster and faster and eventually, we finished in P8. Today, we were struggling a bit and we aren’t fully there where we want to be. That is what we have to work on.”

Hubert Haupt, BLACK FALCON #6: “In qualifying today, we didn’t do well and we had to start the race from P30. Early on, I was able to make up some places and hand the car over in P16. First place in class is super, of course, but we still have to work on our performance in qualifying.”

Euan Hankey, RAM Racing #49: “Thanks to my teammates, it was a relatively relaxed race for me, they handed the car to me with a huge margin in our class. I didn’t have to attack or defend, I just had to bring it home. Many thanks also to the entire RAM Racing team that had perfectly prepared the Mercedes-AMG GT3 for the weekend.”