Second overall for Heimgartner at Taupo

Second overall for Heimgartner at Taupo 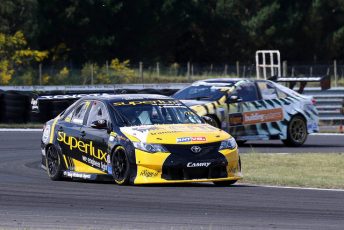 Andre Heimgartner claimed second overall at round two of the BNT V8s in Taupo (New Zealand) at the weekend.

Heimgartner – who last week announced he will drive with Nissan Motorsport in the 2018 Supercars season – finished just five points behind his Richards Team Motorsport teammate Jason Bargwanna for a good result on what was a very hot weekend in the car.

Claiming pole position on Saturday morning, the Melbourne-based Kiwi went on to win the opening race of the weekend in dominant fashion where he was followed home to the line by Bargwanna and another Australian driver, Jack Smith.

“The car was handling really well, and I managed to just drive away really,” said Heimgartner.

“Early on I was pushing a bit harder, but once I had bit of a gap to Jason I eased it off and tried not to burn the tyres up for the rest of the race.”

Starting on the front row for the second race of the weekend on Sunday morning, the performance of the car wasn’t the same with the 22 year old battling the hot conditions to eventually finish fourth.

Heimgartner bounced back with a dominant victory in race three, beating Bargwanna home to the line by 6.9 seconds.

“In race two, we went the wrong way with setup and we just had no speed, it was just a matter of holding on for us,” Heimgartner said.

“Salvaging fourth in that race wasn’t too bad, better than a DNF. We’ve just got to try keep beating Bargs!

“The final race was quite straight forward, I got into the lead by turn two and it was pretty simple for the rest of the race.”

Heimgartner is relishing having such an experienced teammate in Bargwanna, saying it pushes him to be a better driver.

“Having an experienced teammate like Jason pushes you to learn and develop more as a driver. These cars are quite unique to what I have driven before, what they require to go fast is quite different.”

Heimgartner will return to New Zealand for round three of the BNT V8 championship, which will run at Ruapuna near Christchurch, January 13-14.