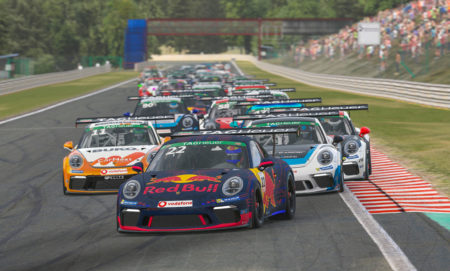 A perfect weekend for Sebastian Job at round seven of the Porsche TAG Heuer Esports Supercup: On the Belgian Grand Prix circuit of Spa-Francorchamps, the Red Bull Racing Esport driver dominated both the 15-minute sprint race and the main event over double the distance. Claiming his first pole position of the season, the Briton earned maximum points and further expanded his overall lead in the hotly-contested championship run on the iRacing simulation platform. With three rounds remaining, his points’ advantage over Joshua Rogers (Australia/VRS Coanda Simsport) and Alejandro Sánchez (Spain/MSI eSports) is now 45 and 56 points respectively.

Already in qualifying for the 15-minute sprint race, Sebastian Job demonstrated his prowess and set the fastest time. Due to the reverse starting order, as stipulated by the regulations, he took up the race from the eighth grid spot. In the first lap, five drivers raced in formation along the Kemmel straight – including Job and his closest rivals for the title, Maximilian Benecke (Germany/Redline), Alejandro Sánchez as well as Joshua Rogers. While braking for the Les Combes chicane, Job snatched third place after a spirited manoeuvre. Benecke, Rogers and Sánchez slotted into position behind him.

Meanwhile, the American Mitchell DeJong from the VRS Coanda Simsport team defended his lead from Kevin Ellis Jr. (Great Britain/Apex Racing UK). With five minutes of racing left, the cards were reshuffled: DeJong first had to let Ellis Jr. pass him, then Job and shortly afterwards Benecke and Rogers as well. Alejandro Sánchez found no way through and remained in sixth place. Shortly before the flag, Job then made the decisive move: In Les Combes, he outbraked Ellis Jr. and swept into the lead. While the championship leader crossed the finish line to claim a commanding victory after starting from eighth on the grid, suspense unfolded behind him: Maximilian Benecke defended third place against repeated attacks from Joshua Rogers. Sánchez crossed the finish line in fifth after a collision with the German VRS Coanda Simsport driver Martin Krönke.

In the 30-minute main race, Sebastian Job was again the man of the day, with the Briton celebrating a lights-to-flag victory. Behind him, a heated battle between the other championship aspirants developed. Benecke, Sánchez and Rogers engaged in a gripping slipstream duel. After almost ten minutes, Rogers collided with Sánchez in front of him while braking for the Bus Stop chicane and inherited third place. The Spaniard rejoined the race action in seventh place. A spirited duel for second place unfolded between Maximilian Benecke and Joshua Rogers. The German managed to fend off Rogers’ attacks until the Australian saw his chance and pulled alongside Benecke.
The two Porsche 911 GT3 Cup racers ploughed through Eau Rouge side by side, however Rogers kept his nose in front. Several seconds later, Les Combes again became a decisive point: the two opponents touched. The inevitable spin threw Rogers back to sixth place and Benecke to eighth. Fifth-placed Alejandro Sánchez inherited third. In the final dash to the flag, Rogers and Benecke again became locked in a duel, this time for seventh place – with the German coming out on top. A few metres from the finish line, Sánchez profited from a collision of Martin Krönke (VRS Coanda Simsport) in front and took the flag in fifth.

After the seventh race weekend, Job leads the overall classification with 445 points, followed by Rogers (400 points) and Sánchez (389 points). On 5 September, the digital version of the Nürburgring hosts another season highlight of the Porsche TAG Heuer Esports Supercup. Sim racers will tackle the 24-hour version of the Eifel racetrack at the wheel of their virtual Porsche 911 GT3 Cup on the combination of the Grand Prix circuit and the legendary Nordschleife.

Comments after the race
Sebastian Job (GB/Red Bull Racing Esports): “Wow, what a great result! The first lap went perfectly! I had a great start and benefited from a couple of accidents ahead of me. That allowed me to move straight to third place. From there, I took up the chase for the lead – and several laps later I actually managed to take the top spot. In the main race, I celebrated a lights-to-flag victory. At first, I had Josh and Kevin chasing me, but then they got entangled in an incident. That gave me some breathing room. I’m over the moon to have earned the maximum number of points. I think it’s the first time that a driver has managed this in the Porsche TAG Heuer Esports Supercup.”

Kevin Ellis Jr. (GB/Apex Racing UK): “It was a surreal experience for me today. The boys from my Apex Racing Team did a great job preparing and setting up the car. In both the sprint and main race I was amongst the frontrunners and could even fend off the championship favourites. Now we aim to continue achieving strong results in the remaining races.”

Yohann Harth (F/Apex Racing UK): “What a weekend! The qualifying result at Spa-Francorchamps is extremely important in order to stay out of trouble as much as possible in the race. I did this well with fifth place. In both races, I gradually worked my way to the podium. I’m very proud of the whole team. With two strong results in a row, our work has paid off. I can hardly wait to contest the three remaining rounds.”