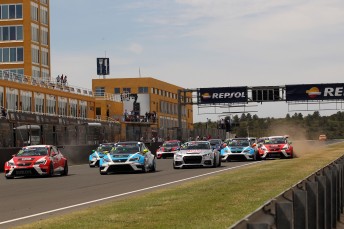 The start of Race 2 at Valencia

MEDIA RELEASE – TCR-  The Seat cars took clear victories on home soil in Valencia as Stefano Comini moved to the top of the TCR championship standings.

In a warm weekend, the SEAT León cars proved to be the fastest and comfortably won Race 1, which ended with a 1-2-3 for the Team Craft-Bamboo Lukoil.

Local hero Pepe Oriola took his maiden win of the season ahead of team-mates Sergey Afanasyev and Jordi Gené.

Race 2 was made very lively from the start by a spectacular accident and the subsequent Safety Car period.

Comini made perfect use of the situation, becoming the first driver to claim a second success in the season.

It was Target Competition’s turn to finish 1-2-3 with Michel Nykjær and Andrea Belicchi behind Comini, while Bas Schouten lost third place on the last lap.

Belicchi also lost his third place as he excluded for not observing a drive-through penalty.

The WestCoast Racing Honda Civic cars struggled throughout the weekend to be on the pace, but Morbidelli inherited third in Race 2 after Belicchi’s exclusion.

Oscar Nogués helped Campos Racing to make significant progress with the Opel Astra; the Catalan qualified eighth and showed a front-runner pace, but was victim of the accident at the start of Race 2.

Bad luck hit the Liqui Moly Team Engstler Audi cars that, after Mikhail Grachev’s promising fifth position in Race 1, were involved in a collision on the first lap of Race 2.

The TCR International Series will resume next week, for Round 7 and 8 at Autódromo Internacional Algarve, in Portugal.