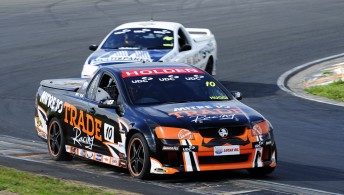 After an amazing season – latterly tinged with sadness – the popular pack of UDC V8 Ute racers gather together for their last encounter of the season, and it promises to be all out racing for championship positions at the Fuchs 500 at Pukekohe Park this weekend.

The paddock at the last round at Hampton Downs, usually a hot sport for adrenalin and race talk, was somewhat more subdued than normal as the entire close-knit ute racing community tried to come to terms with the news that they had lost one of their original competitors – Peter ‘Rocketman’ Robb – who passed away the week before following a helicopter crash.

One thing the Rocketman would have definitely wanted was some good hard racing over the weekend and the boys duly obliged, with the big surprise of the weekend being the great win in Race 2 for James ‘Huggi’ Urquhart in the immaculately presented Mitre 10 Trade Racing Holden.

Like the Rocketman, Huggi has been around since the popular series began and everyone was delighted to see him take his first ever series win. It was hard fought too, with series leader Kris ‘Killa’ Walton piling on the pressure for the entire race as he sought to push Urquhart into a mistake. It never came, however, and Walton acknowledged Huggi’s race winning drive simply by saying there was ‘Nothing I could do, he was just too fast.’

The rest of the weekend, however, was all about Walton, who put a points penalty behind him to win the round. Walton is a racer first and foremost, not a points chaser, and this was evident in the final race when he simply annihilated the field despite this being only his first visit to the circuit.

Walton has dominated the UDC V8 Ute series this season, and has replicated success in New Zealand with success across the Tasman in the Australian series, which he also leads with one round to go. His speed is unquestionable and his real skill seems to be that he is able to hop straight into his Multispares Racing Ford Falcon and extract the maximum it has to offer pretty much on his first or second flying lap. That is a rare mark of talent in any racing series and it seems a shame Kris has never been able to ply his trade in, for example, a V8 Supercar or a GT endurance car. One suspects he would be devastatingly fast.

If Walton is uncatchable this weekend on a circuit he now knows and has won on, then the battle for second in the series is actually wide open. Mr consistency Brett ‘The Scud’ Rudd sits second on 471 points. He’ll be happy with that going into the last weekend of 2014, but is still desperate to take his first series win in the lovely red Pallet Supplies Racing Holden. His major threat lies with Mike ‘Buzz’ Lightfoot, who started the season well, lost his way a little in the middle and is now fully back on song after a strong weekend at Hampton Downs. If Rudd hits trouble, all Buzz needs is a clean weekend and three good finishes in the races and he will take the runner up spot.

There’s a late charge on also from Sam ‘Bazza’ Barry, who has shown how fearless and fast he is in a racing Ute. Throughout the season he has revelled in its 400 horsepower and has been a joy to watch – flinging the Bel Group Ford Falcon around with the kind of flair and skill you would normally associate with a seasoned campaigner. Don’t write off a continuation of his late series charge and a top three championship position is not beyond the realms of possibility.

Watch out also this weekend for the latest Aussie hot shoe to enter the series. Mason ‘Chuey’ Barbera has only done two weekends of racing Utes and these are his only outings in anything other than a kart, but he has already shown that if he continues in the category in 2015 he could be tough to beat. He has natural flow and pace and will be a joy to watch at Pukekohe, particularly through the daunting Turn 1 – where his skills will undoubtedly shine.

Of the rest, Peter ‘Kaos’ Ward and Geoff ‘SOS’ Spencer have fallen away from the title chase in recent rounds, and will be looking to bounce back in style with big results in the season finale. Glen Collinson is also another to watch now the Panorama Motorsport boys have found the sweet spot on the Betta Autoparts Ford Falcon FG – the only Coyote-powered FG in the series. Of late Collinson has looked the most likely to match Walton’s pace and steal a win, and Pukekohe could be the weekend when everything comes together for him and the team.

Watch out too for Matt ‘Stinger’ Spratt in his second V8 ute racing weekend, now with extra testing miles under his belt in the ex-Hanley Holden and new recruit Simon Ussher, who is also new to the category having purchased the successful ex-McDonalds Ford ute previously driven by Simon Bierne.

In a busy weekend of motorsport, make sure you stop and take in the UDC V8 Utes. It’s great racing where skill and bravery are fundamental to success and with so much young talent from karting and lower categories shining; it’s also a great place to spot the talent of tomorrow.

Qualifying and Race 1 take place on Saturday, with Race 2 and Race 3 on Sunday.