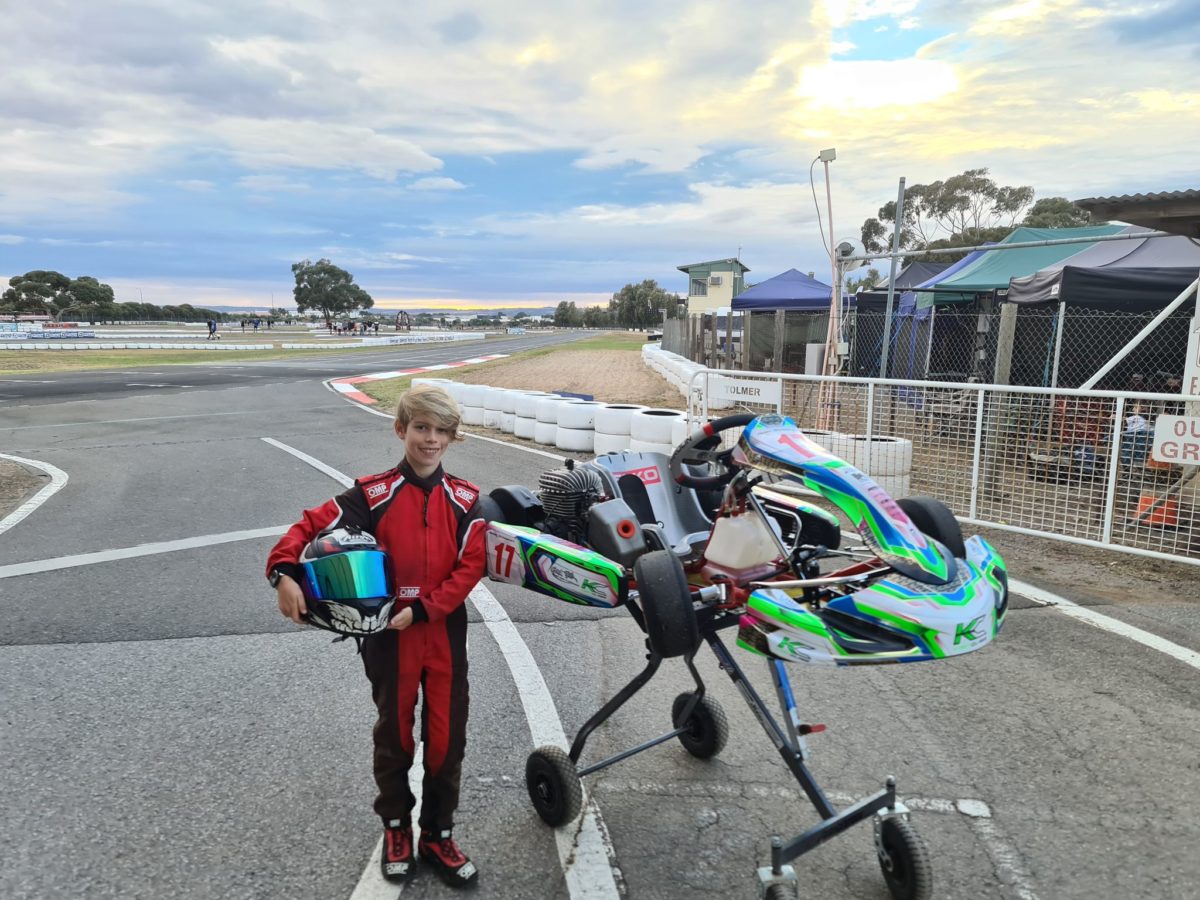 Victorian Aiden Schweikert took place in the second round of the SP Tools Australian Kart Championship over the weekend at the Bolivar kart track. Schweikert had a tough but learning round at the open round of the series. Aiden has been continuing his strong progression in season 2022 by recently taking out his first open win at the recent Bendigo Golden Power Series round. Schweikert once again racing under the David Sera Kartclass banner was looking to race well in the near fifty kart Cadet 12 field.

Schweikert had shown good pace in Friday practice and hit the track for qualifying Friday afternoon in the upper fifty percent of the field. The Link Airways sponsored entry put in great speed to get himself inside the top twenty of the field in the early stages. Aiden continued to move forward inside the top fifteen and was even pushing the top ten as the session went on. Schweikert did a fantastic job to come away with position eleven overall in a near fifty kart field of drivers.

Heat one was the racing starting point for the young driver and he was looking to get as far up the grid as possible. The Jeremy Cross Physiotherapy sponsored entry settled into position six and battled around the top five. Aiden went back and fourth inside the top ten racing hard and gaining more experience at the wheel. Schweikert crossed the line in position eight to finish the opening heat. A post-race infringement dropped the young driver down to position ten with work to do.

Schweikert was looking to turn it around in heat two but an incident on the opening lap shuffled the young driver back to position sixteen. The Haley Hire backed entry put his head down and started to try and make his way forward and up the field. Aiden put in some brilliant passes and got his way back into the top ten by race end. Schweikert crossed the line in position ten overall grabbing more valuable points to his weekend haul.

Aiden was now looking forward to his final heat of Saturday and was keen to make his way forward. The G & L Motor Repairs and Performance entry settled into position seven and was racing hard inside the top ten. While looking on for a strong result, Schweikert made contact with another kart and dropped down to position fourteen and damaging his kart in the process. This concluded Saturday’s racing and the young driver was now looking to Sunday’s racing.

Due to his results on Saturday, Schweikert was starting just outside the top ten in heat four looking to move forward. The Kartclass supported entry was as high as position twelve throughout the race but lacked some of the pace he had Saturday, due to damage left over and not found from heat three. Aiden drove his heart out and brought his kart home as forward as possible. Aiden crossed the line in position fourteen overall and this now had him starting out of position twenty three for the final.

Schweikert had the eyes forward and was looking to move forward in the final. The Link Airways backed entry was shuffled back of the start and was near the back end of the top thirty. Aiden put his head down and moved forward to just outside the top twenty in position twenty two overall in a good charge back. Aiden’s father Justin spoke post-race weekend of his sons round. “It was an up and down weekend, we learnt a lot and had some fun. The end result wasn’t what we wanted but we’ll head to the next round stronger again”. Schweikert will be back on track this weekend for the Victorian Open State Championships at the Eastern Lions Kart Club.