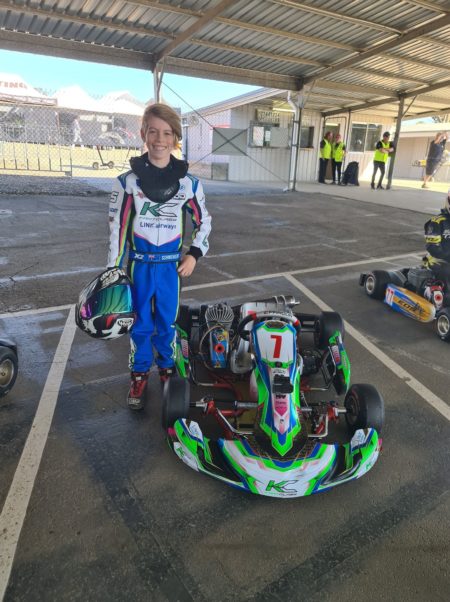 Aiden Schweikert was taking on his second major title in different states over the weekend at the Eastern Lions Kart Club. Schwiekert took on round two of the SP Tools Australian Kart Championship over Easter weekend in Bolivar South Australia and was back in Victoria over the weekend for the Victorian Kart Championship. Aiden had a full grid of forty karts to deal with so the young driver was in for a fast and hard weekend of racing!

Schweikert started his weekend with Saturday morning qualifying. The Link Airways backed entry headed out on circuit and tried to give himself as much of a chance to set a quick time. Aiden was able to make his way into the top thirty but the calibre of the field was high and young driver was up against of some of the countries best! Schweikert continued to move forward and came home just outside the top twenty five in position twenty six. Aiden and his dad Justin were looking to tune up the kart and move forward in racing.

The young driver was looking to heat one to make up as many positions as he could. The Jeremy Cross Physiotherapy backed entry had a breathtaking opening lap moving up ten positions and just outside the top fifteen! Schweikert was able to use his race skills and strong driving to continue moving forward inside the top fifteen. In a stellar performance, Aiden was able to move up thirteen spots and come home in position thirteen!

Aiden and his team were wrapped with their opening heat and the young driver wanted to continue the turnaround in heat two. The G & L Motor Repairs and Performance backed entry got another great start and once again moved his way inside the top fifteen and on a charge forward. Just went it looked like Schweikert was on for another amazing result the young driver was ran off the circuit and dropped to the rear of the field. Aiden was still able to finish the race but came home in position thirty five.

After a disappointing end to Saturday, Schweikert was looking to kick Sunday off in better fashion, starting out of position twenty five for heat three. The Haley Hire supported entry got a great start jumping up four spots on the opening lap. Aiden was able to move up another five spots across the race and being pushing on the edge of the top fifteen. Unfortunately, Schweikert’s bad luck had followed him overnight when he was once again involved in an incident dropping to position thirty two by races end.

Due to the poor results of heat two and three, Aiden was starting out of position twenty eight and was determined to bring home a strong result. The Link Airways backed entry got another excellent start moving up seven spots on lap one! Schweikert drove like a man possessed in the final making his way inside the top twenty five and then the top twenty. In an enormous driver making up fifteen positions in twelve laps, Aiden was able to come home in position seventeen capping off his weekend on a high.

Aiden’s father Justin spoke post weekend of his young son’s tough weekend. “Definitely a learning weekend for both of us, with lots of character building thrown in. Despite some setbacks through no fault of his own, Aiden kept his chin up and pushed hard every race”. Aiden and his father Justin would like to thank Link Airways, Jeremy Cross Physiotherapy, G &L Motor Repairs and Performance and Haley Hire for their help.