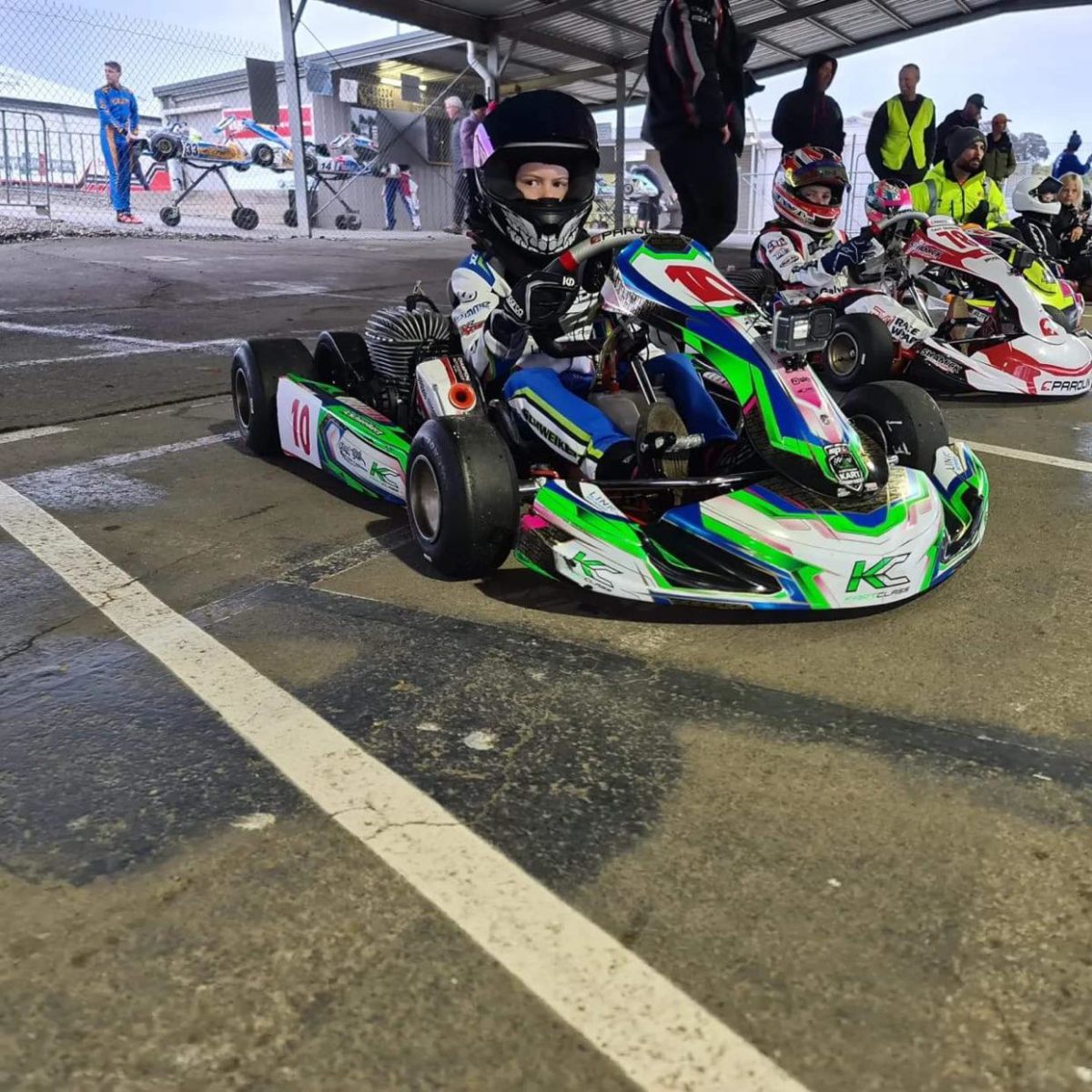 Aiden Schweikert was back on track over the weekend at the third round of the SP Tools Australian Kart Championship at the Eastern Lions Kart Club. Schweikert has been a driver making his way up the grid in 2022 but was up against the countries best in the third round of the championship. Aiden was in for a tough weekend of racing having limited preparation on the wet tyres used in 2022.

Aiden used all of Friday practice to get himself in the best window possible come Friday afternoon qualifying. The Link Airways backed entry hit the circuit in the lower 50% and was pushing as hard as he could to set fast lap times. Schweikert improved his time as the session went on and put himself in position thirty two overall. Aiden and his team were now looking to tune up the kart for a wet Saturday of racing.

The heavens had opened up on Friday night and heat one was to be under wet conditions. The G & L Motor Repairs and Performance sponsored entry got a clean get away and was trying to gain as much experience and pace as possible in the tough condition. Schweikert was inside the top twenty five and was looking to push forward as the race went on. Aiden put in a nice opening heat coming home in position twenty five overall and grabbing some valuable experience for the remainder of the weekend.

Heat two was much the same weather wise and Aiden was once again looking to move forward. The Jeremy Cross Physiotherapy & Haley Hire backed entry got a clean get away and was down in position twenty three in the early stages. Schweikert put his head down and started to work his way up through the field and into the top twenty. Aiden put in his best performance of the weekend so far crossing the line in position eighteen!

Schweikert looked to heat three to continue on with his good results. The Link Airways backed entry settled in the top twenty five in the early stages but didn’t quite have the set up or pace to challenge like he had in the previous heat. In much damper conditions, Aiden continued to battle on and take in as much track time as possible. Schweikert crossed the line just outside the top twenty five in position twenty seven and looked to turn things around in the final heat.

The final heat was once again under extremely wet conditions and Aiden was looking to move up positions to help his starting spot for the final. The G & L Motor Repairs entry was inside the top twenty in the early stages with a great start. Schweikert dropped back a few spots just not having the pace to go with the top twenty. Aiden finished his final heat race in position twenty two and was starting the main final out of position thirty nine overall.

Schweikert was looking to finish his weekend on a high and make up as many spots as possible. The Jeremy Cross Physiotherapy & Haley Hire backed entry had an enormous opening lap moving up ten spots to be inside the top thirty. Aiden continued to put his head down and throw everything in his Arsenal at making up positions through the field. Schweikert in his best drive of the weekend was able to move up seventeen spots and cross the line in position twenty two overall in a great finish to his weekend.

Aiden’s father Justin spoke post weekend on making the most of his limited wet experience. “Looking at the weather I knew it was going to be a tough weekend for us. Aiden’s only driven in one wet race before, so it was a steep learning curve for him. I was really proud of how he raced even though we were well off the pace. We had a great weekend with our mates though”. Schweikert will be continuing his busy 2022 season in the back end of the year.