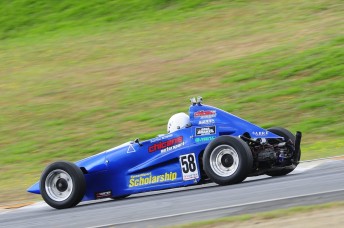 Brook Reeve won the New Zealand Formula First Rookie championship with one round remaining after taking an unassailable points lead at Hampton Downs.

The 17-year-old teenager from Blenheim continued to notch up more podium placings at the south Auckland race track to add to a season that has so far seen him finish in the top three on nine occasions.

Reeve is the first driver in the 14-year history of the SpeedSport Scholarship program to win the Rookie title at the penultimate round.

“Only two of our Scholarship drivers haven’t won the Rookie title but no-one has won it before the last round of the season,” said co-founder Dennis Martin.

Driving for Martin’s Sabre Motorsport team, Reeve is 247 points clear of rival Elliot Andrew in the Rookie stakes and can not be beaten with the final round still to be contested at Taupo over Easter weekend.

At Hampton Downs, Reeve crossed the finish line 2nd in the first race but was later given a 10-second penalty for crossing a white line on the track. However he ended the weekend’s racing with two 3rd placings.

“The team has given me a very good car and I was close to getting another race win,” said Reeve.

“Racing three and four [cars] wide is pretty exciting stuff and this very close racing is really valuable in developing my racing career.

“I’d love to get at least one more win before the season ends,” he added.

Not only is Reeve a new driver to the Formula First class, he is also in his rookie year of motor racing. His move from racing karts to cars came after winning the annual SpeedSport Scholarship last May