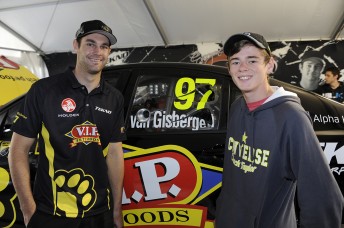 What do V8 Supercar star Shane van Gisbergen and Feilding High School student, James Webb, have in common? They both started their circuit racing careers by winning the SpeedSport Scholarship motor racing prize.

The pair met for the first time when van Gisbergen was in New Zealand for the Pukekohe round of the Australian Supercar championship.
For young Webb, meeting his racing ‘hero’ was inspirational as the 16-year-old looks toward the next step in his single-seater career after finishing his annual SpeedSport Scholarship prize package.
“I have followed Shane’s career closely and getting the opportunity to meet and talk with him was a real highlight of my Scholarship year,” said Webb.
“He told me how much he’d learnt from his Scholarship year and how it started him on his motor racing career. I’m sure it will help me too as I move to the next step,” he added.
The young rookie also had the opportunity to spend time with Shane’s Tekno Autosports team and saw a V8 Supercar up close for the first time.
“It’s a big step up from my Formula First,” said Webb, “but it just shows me where a career can lead to if I work hard and develop my craft.”
When van Gisbergen won the SpeedSport Scholarship in 2004 Webb was just 6-years-old.
“Shane told me the most important thing was to keep going in the sport, work hard and keep trying to move ahead,” said Webb.
After his rookie season in the New Zealand Formula First championship, Webb is now considering the best option for next season but is determined to stay in single-seaters for the immediate future.
One of the most important racing advise tips van Gisbergen gave his younger graduate was the emphasis he must place on qualifying well.
“Qualifying is everything. To have a chance at winning a race, firstly you must qualify at the front of the field. We talked a lot about that,” added Webb.
And while Webb is now considering the next move in his career, six finalists will line-up at the Manfeild race circuit near Feilding on Sundayfor the final showdown in the 2014 SpeedSport Scholarship.
Following on from eliminations on Saturday, the top six drivers will race off the next day for the $50,000 prize package that includes a fully funded season racing a Formula First car in the New Zealand championship series, racing for co-founder Dennis Martin’s Sabre Motorsport team.
On top of the racing package the winner also receives a personalised race suit, boots and racing gloves from Chicane and a new Arai race helmet from Dold Industries.
This Sunday’s winner will become the 14th annual SpeedSport Scholarship graduate. The program has kick-started the careers of van Gibsbergen, Tauranga’s Richie Stanaway, who currently lies 2nd in the GP3 category – a support class to this years Formula One program, triple New Zealand Grand Prix winner Nick Cassidy and V8 SuperTourer driver, Andrew Waite among others.
Van Gisbergen will be racing in the latest round of the V8 Supercars in Perth this weekend.