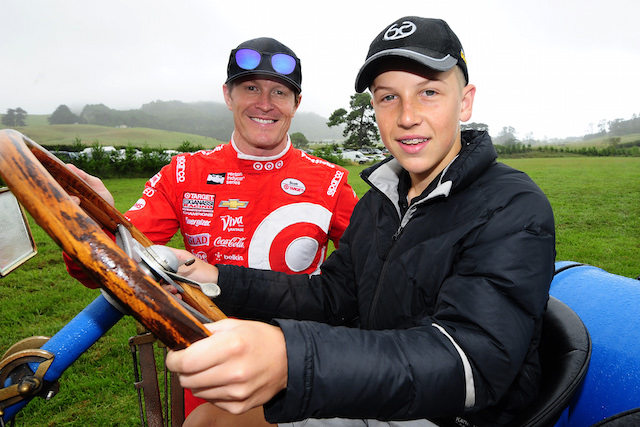 The two have a lot in common – both were the same age when they started competing in the Formula First with some similarities being drawn about both drivers.

Lawson had just turned 13 years old when he started racing in New Zealand’s entry level single-seater category, as was Dixon, who 22 years later has established himself as one of the greatest IndyCar drivers of all time.

In his debut season Lawson has already notched up 4 podiums and a race win. Scholarship co-founder and driving coach Dennis Martin says the two drivers have similar driving traits.

“I remember Scott was very fast, very early on and that’s an indication of sheer talent. He had the ability to go fast right from the drop of the flag and Liam has proved to be similar.”

While Lawson has not notched up the same string of race wins Dixon scored in his rookie season, Martin says that’s more to do with his qualifying position than his race-craft and speed.

“I think it’s fair to say the competition today is much tougher, and as a result the chance of a rookie driver ever matching Scott’s Formula First success would be much, much harder.

“Liam has also suffered from starting behind competitors who have been more of a road-block to him and that allows the two on the front row to bolt away at the start. But he still shows that same ability to go quickly from the start,” Martin added.

Lawson described his meeting with Dixon “as a bit overwhelming” but says he’s drawn great motivation from it to pursue his motor racing, in hope that he too can forge a professional career in the sport.

“It’s just awesome what Scott’s achieved for a Kiwi driver and I hope one-day that I might even get to race in the United States.

“He was so friendly, I’ll never forget the chance I had to meet him.”

Lawson is currently leading the Rookie of the Year standings of the New Zealand Formula First championship.