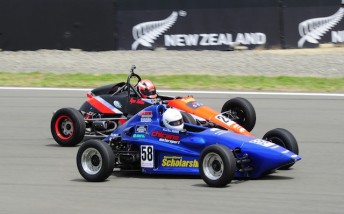 MEDIA RELEASE: New Zealand – Entries for New Zealand’s most successful young driver development program close this weekend as the countdown begins to find the 15th winner of the SpeedSport Scholarship.

Entrants will head to the Manfeild race circuit near Feilding on Saturday, May 23 for a series of evaluation sessions before a top six is chosen to race off in the final the following day.

Over 200 young drivers have entered over the history of the program which has kick started the motor racing career of some of New Zealand’s most successful motor racing stars.

“The skills and race-craft a young driver learns in these cars really does set them up for a successful foray into motor racing. Because the cars are not sophisticated the emphasis is mostly on driver development.”

The SpeedSport Scholarship has again attracted a diverse range of young drivers for this year’s shoot-out, including one entry from Australia, and another who is returning for a shot at the major prize after having first entered five years ago.

“We do get international enquiries and this year is not the first time we have had an overseas entrant,” said Martin.

“The SpeedSport Scholarship program is held in high regard in motor racing circles in countries outside of New Zealand and that is a testament to the quality of drivers that have come through the program.”

An independent judging panel puts the six finalists through the last day of the program and Martin is adamant this has been the one of the main keys to the program’s success.

“The judges have no preconceived ideas, have no background knowledge of the entrants who are judged simply on their performances on the day and how they handle the off-track activities required by the judging panel,” he added.

Among those to succeed from the program have been V8 Supercar star Shane van Gisbergen, international single-seater drivers Nick Cassidy (triple NZ Grand Prix winner) and Richie Stanaway, who is also a works driver for the Aston Martin team.

The SpeedSport Scholarship winner receives an all expenses paid year racing a Formula First car under the guidance and tuition of Martin, including the Manfeild Winter Series and the New Zealand Formula First championship, 12 events in total.

A personalised race suit, boots and racing gloves are provided to the winner from Chicane.

Entries for the 2015 SpeedSport Scholarship can only be made on-line at speedsportscholarship.co.nz and close this weekend.